Just to review a few facts: I am a vegetarian. I do research and go out of my way to be sure I don’t use any toiletries or cosmetics made by companies that test on animals. I do wear leather shoes. Really cute ones, and yes, I know that makes me a slight hypocrite. But c’mon now, cute shoes? Oh! And boots.

Another fact is that I do not visit animals in captivity. No zoos, no Sea World. Mostly. On my first trip to Hawaii I went on an excursion and swam with the dolphins in the ocean. No, they don’t let you ride them or pet them, but it was definitely a more authentic experience. We even had a Marine Biologist on board (a real one)! As I was proudly telling her I really wanted to ride a dolphin but wouldn’t help perpetuate their captivity she educated me on how well cared for the animals are and that really, on balance, dolphins actually do enjoy human interaction. So when we went back to Hawaii two years ago we went right on over to Sea Life Park or whatever to ride a dolphin. For its own benefit, mind you.

The dolphin line was really long, but no one was in line for the sea lion, so, we compromised, because we’re not really wait-in-the-hot-sun-for-hours-to-ride-a-dolphin types. Anyway, it was very cool, and a great photo op with, inexplicably, a fake mountain scene in the background. You can’t ride a sea lion, but it will kiss you if you bribe it with a ton of smelly fish. 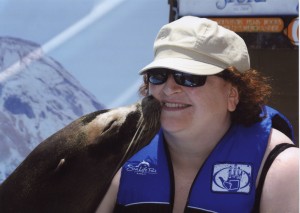 We still don’t typically go to zoos because it makes me sad to see the animals all contained. I always picture them plotting their escape. What I have never pictured is animals trying to sneak in to the zoo.

But you learn something new every day. Here is the actual headline from Saturday’s Washington Post:

The article goes on to say: “The zoo said the cheetahs appeared unharmed.”

Wow. So there’s that. And apparently, this is not an isolated incident. “In November 2009, a deer, apparently from the adjacent Rock Creek Park, jumped a zoo wall and was killed by two lions.”

The reader is left to presume that the lions were unharmed.

If they gave Darwin awards out to animals, these two deer would certainly be in the running.  So note to deer: if you insist on breaking into a zoo, might I suggest checking out the otters? Maybe some nice birds? There are lots of good options; let’s just agree that predatory carnivores are probably a poor choice.

16 Responses to What’s For Dinner, Deer?