I always admired Vi’s can-do attitude, including her aggressive fly hunting techniques.  I like to just shoo flies away and whine about them non-stop; Vi was much more action oriented.  When Dan and I found a souvenir fly bat in Helsinki, well, we had to bring it home to her.  I wish she was still enjoying it but it came back to us when Vi passed away, and now when we look at the fly bat it brings back our fond memories of her.  So if you’re ever at my house and I seem to be engaged with a fly bat, I’m not, OK?  I’m smiling because I’m thinking of Vi, and she was really special to me and I have a lot of lovely memories of her.  Anyway, the fly bat is both functional and decorative, and although it has never seen any action, I believe it would work well if called upon for duty. 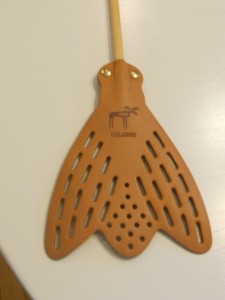 I know what you’re thinking.  She sounds like a nice lady and you bring her a souvenir fly bat?  OK, first of all, yes.  And you know why?  Because in some crazy tourist trap shop in Helsinki it was available for sale, was it not?  If someone in my family loved dried meat I guess I would have also picked up a package of the Moose Jerky that was on display nearby.  My brother CJ didn’t even know how badly he wanted a cheap plastic snow globe collection until I started bringing him cheap plastic snow globes. It’s a little thing I like to call thoughtful.

And if you still don’t think it was a good idea, a woman I knew, a co-worker in a far flung office, used to make fly bat, cozies, I guess, for lack of a better word.  They were little hand sewn pieces of fabric to slip over the business end of a fly bat, and they weren’t just functional either; the fly bat cozy she kindly sent me as a gift was made of brown and white gingham and had a little face and fabric hair and was less a cozy and more some kind of Fly Bat Fairy.  She even sent the fly bat with it, although she insisted on calling it a swatter.  It was a very sweet gift, and I think I kept it in my office after that, but I have no recollection of what happened to it after that.  It seems a sure bet I would have given it to Vi though.

For the record, we used to get Vi real gifts sometimes too, not just fly bats and re-gifted Fly Bat Fairy cozies.  We brought her chicory coffee from Café Du Monde in New Orleans, for example.  Don’t judge.

As with most of my stories, this one needs to come back around to either a TV show or my cats, because I’m that blogger.  My favorite arbiter of justice and intelligence on the airwaves, Judge Judy, swats down idiots like flies, but recently she had a real fly buzzing around her head while she was trying to think.  The Judge rolled up her papers and prepared for battle.  Then she smacked the paper down!  But the fly got away, and she noted that if she had the proper equipment, the fly would have been toast.  So her trusty Deputy Byrd found a fly bat and brought it to Her Honor, and sure enough BAM!  She made short work of the fly.

Vi would have been proud.

Like Loading...
This entry was posted in Uncategorized and tagged Animals, Blogging, Career, Family, Humor, Television, Travel. Bookmark the permalink.

8 Responses to Viola At Bat