There’s A Frog In My Throat, And I Might Smell A Rat

Well you know I’m just not happy unless I have a Medical Mystery to unravel. I started getting congested back in January. I’m still congested. It’s all in my throat; I feel like I have to clear it all the time. I’m getting on my own damn nerves let alone everyone else’s. I finally broke down and went to see an Otowhatchamahoozit, you know, Ear, Nose and Throat doctor. An ENT. 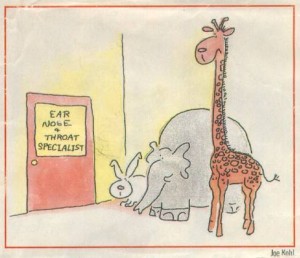 I was dreading the appointment because I typically don’t love someone poking around in my ears, nose or throat, but I had to suck it up. I don’t like the guy. Not one bit. Let’s start with the fact that I was sure to get the very first appointment in the morning, and I arrived 15 minutes early. And I know he was there because I caught a glimpse of him. Yet somehow he did not see me until 20 minutes after my appointment time. Maybe he glimpsed me in the waiting room, or worse, read my file, and decided he had to steel his nerves before dealing with me. Who knows.

He finally calls me back. Well, calls us back actually. Dan was with me because he finds my Medical Mysteries an endless source of entertainment. The doctor starts going through my medical history which frankly can take some time. But the weirdest thing-he doesn’t shut the door. Now clearly I am not exactly the most private person in the world, I mean, is there anything I haven’t shared with you guys, whether you wanted to know or not? No. You get it all.

Still, it was odd so I finally asked him why he didn’t shut the door. He muttered something about protocol for being with a female patient. I have really never had a male doctor concerned about this, but maybe the guy had been burned, so OK. Here’s the thing though, Dan was sitting in the room with me.

Moving right along, I tell him my symptoms. Then he repeats them back to me, wrong. He asks me how long I’ve had a sore throat. I say that I don’t have a sore throat. He frowns. He then starts going through a detailed explanation of sinus cavity structure and who knows what else. He’s using a lot of medical-ese and also starting to gross me out because I am extremely squeamish. Dan is delighted of course and starts asking him some very specific questions about the way things work. Now the two of them are poring over a chart that shows all the components of everything that is behind my ears, nose and throat. Yuck. 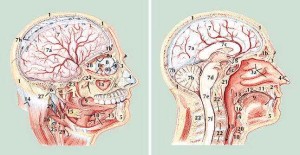 I remind them both that I’m still there and actually, that I’m the patient. I should have kept my big trap shut because then he starts pulling out all these weird looking instruments and talking about everything he’s going to do to check me out. I start feeling faint. I give him my nervous laugh and tell him I’m one of those patients who doesn’t actually want to know anything. I will close my eyes and shut up while he tortures me, but I am not the slightest bit curious about any of it. Dan pouts.

I can’t go into the rest because it involved some seriously unpleasant poking and prodding. Then we had to have another endless discussion about how I lost a sinus during chemo. No, I don’t know what happened but it was the least of my worries at the time and really hadn’t posed any problem. He seems annoyed with me that I lost a sinus, like I did it on purpose. I then had to break the news to him that while I was doing chemo I somehow also lost some cartilage in my nose. I know ordinarily that would seem alarming, but in Cancerville, weird shit happens on a daily basis. You learn to ignore anything less than bleeding out.

Anyway, Dr. Self-Absorbed rambles on some more, and I realize he has this annoying habit of ending every other sentence with “you know what I mean?” I don’t know what he means, and I think he spent an awful lot of time studying this stuff just to be asking me if I know all about it. You know what I mean?

He prescribes a half dozen different pills and ointments and all kinds of crap and sends me on my way. Did any of it work? No, it did not. Why? Because naturally I have a rare and difficult to treat staph infection. Note that my predisposition to staph infections came in handy when it always got me a private room in the hospital, but as a general rule it’s not that great to be Typhoid Mary.

You know what’s worse? Dr. Ick calling me up and reading the lab report to me in a droning voice and saying “you know what I mean” every minute. I finally say “No, I have no idea what you mean. Just tell me what I have to do.” He drones on for, I swear, another 15 minutes before finally getting around to calling in a prescription for another antibiotic and I promise to call and follow up soon.

The next day I get a call from some woman from his office who says that the doctor told her to call me because, and I quote, I wanted to schedule surgery. Let me assure you that I have never wanted anything less in my life. I tell her I don’t know what she’s talking about and she starts babbling about replacing my lost cartilage with a plastic doohickey and really?

Here’s the point to all this. My mom. Yep, my mom. Several facts have already been established. She is a Jewish mother, my Jewish mother in fact. She reads my blog. This post is about me seeing a doctor. Her logical conclusion? I am desperately ill and possibly even dying right this minute but have selfishly withheld this fact just to torture her. She is highly suspicious that even now I’m not saying what’s really wrong.

Mom, listen carefully. I am absolutely fine. Dr. Know-What-I-Mean is going to get his paws on me again and fix whatever the hell is going on. And look at the whole upside of this thing. If some other medical situation pops up and lands me in the hospital, they will once again have no choice but to give me a private room.

Like Loading...
This entry was posted in Uncategorized and tagged Cancer, Family, Health, Imagination. Bookmark the permalink.

14 Responses to There’s A Frog In My Throat, And I Might Smell A Rat