The Hills Are Alive…And Crawling With Tourists

As I mentioned yesterday, Dan and I once traveled to Salzburg, and my personal favorite part of the trip was a 4 hour The Sound of Music bus tour.  We don’t typically jump on a bus with a bunch of other Americans when we travel, but it couldn’t be helped.

As soon as we hopped on the bus, the soundtrack from the movie began playing on an endless loop.  We (meaning everyone on the bus except Dan) sang I am 16 Going on 17 so many times that Liesl would have been 30 by the time we finished.  That song has special significance to me; without it I would have never learned what “cad” meant at such an early age.  How do you Solve a Problem like Maria? brought me back to my college days, when my friend used to lead a sing-a-long for her roommate, Maria.  To this day I still don’t know how you take a cloud and pin it down.  And despite the timeless lesson of Do Re Mi, I can’t read music or sing.

The tour would have been a lot better if they didn’t insist on telling us the “real” story of the Family Von Trapp.  The real Maria was apparently nothing like Julie Andrews’ Maria in the movie; she was actually short-tempered and prone to throwing things when she was angry.  She married the Captain because she loved the children, but she made it very clear she wasn’t in love with her husband.  There was no gazebo, no Baroness, and no escape on foot over the Alps.  They made their escape by climbing onto a train headed for Italy.  The church we visited was where the Captain and Maria were married in the movie; in reality they got married in Maria’s former convent.  Here’s the real deal Von Trapp Family: 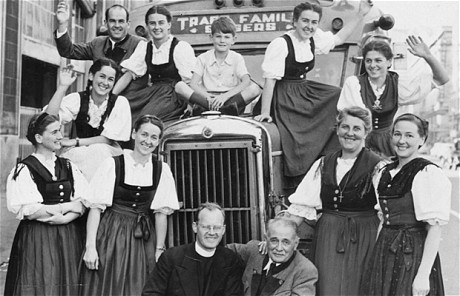 Who wants to know all that?  I much prefer the romantic movie version of their life.  So when we arrived at the gazebo that was built for the movie, I figured I’d jump up on the bench and try to dance like Liesl.  Then I remembered that I’m me, Arthur Murray drop-out, and thought the better of it.  When we got out of the bus in the Alps, I was going to throw off my hat, twirl in the wind, and sing The Sound of Music.  But I wasn’t wearing a hat, twirling would no doubt end in injury, and I really can’t sing at all.  Here’s the Von Trapp Family as I like to think of them: 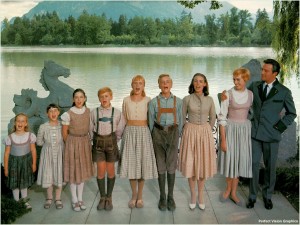 Dan and I stood on that very spot in the Mirabel Platz and got all goosebumpy.  OK, I got all goosebumpy and Dan got bored.  While I loved every minute of the tour Dan was less enthusiastic; like a lot less.  Every time I glanced over at him he was slumped in his seat with his head in his hands.  He bounded off the bus at every stop, relieved to get away from the, well, gestalt of it.

As the bus circled back into town, we came up a road with a bunch of trees on both sides.  In the movie it’s the street where the children were all hanging out in the trees, wearing their new play clothes, when the Captain came home.  If I squinted just a little, I could almost see those fictional Von Trapp kids, dressed in their very fashionable play clothes made from drapes (although Scarlett O’Hara did it first), smiling for the camera. 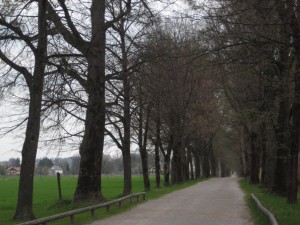 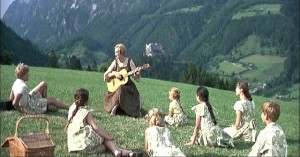 As we pulled in to our last stop, the bus driver played Edelweiss, again; and everyone but Dan sang along, again, and then they gave us packs of Edelweiss seeds as a souvenir.  Every time I saw the pack of seeds sitting around, I would start “singing” again.  Dan says he has no idea what ever happened to those seeds.

Like Loading...
This entry was posted in Uncategorized and tagged Fashion, Humor, Marriage, Music, Social, Travel. Bookmark the permalink.

1 Response to The Hills Are Alive…And Crawling With Tourists