The Elephant In The Room

It seems like an unlikely pursuit for me, but due to some unique circumstances I participate in a White Elephant every year.  It’s all adults; no kids like Jane to ruin everyone’s good time while they’re being greedy.

Traditionally, we start each year with an argument about the rules, until everyone remembers that my way is the 100% unequivocally correct way to play the game.  Between you and me, it’s kind of cute how other people think this is the year they will prevail.  Forget about it suckers.

Regardless of the rules, typically a White Elephant seems to be successful when everyone ends up with something they don’t want, don’t need, or don’t want to need.  Everyone except the person who gets my gift; because I am in a perpetual state of confusion about whether we’re supposed to be doing gag gifts or real gifts or what, and I err on the side of caution and get the nicest unisex gift $25 can buy.

But it’s always a toss-up.  This year one of the guys opened his gift to find a Justin Bieber perfume and lotion kit.  This poor sucker doesn’t have a daughter or a niece or a neighbor who is the right age/disposition for that bag of crap.  The next gift someone opened was a bottle of, apparently, a very nice red.  The person who gets that just sighs and puts it out on the table, because clearly someone is going to snag it immediately.

There are inevitably Chia pets, lava lamps, old age kits with Geritol and ExLax (that one falls into the don’t want to need category).  I usually get one of those items.  A few years ago I lucked out and got the first/last pick.  There was an enormous Nerf gun that was clearly the best gift ever, so I hadn’t lost faith entirely.

There are the practical gift type people, the ones who give a thermos, or a first aid kit, or a a set of mini screwdrivers or whatever.  I’ll admit that although I have little idea how to use them, I do love the mini screwdrivers, but not as a gift.  Gifts should be frivolous and fun.

In the last category are the wholly unimaginative gift givers.  Oh goody, another Starbucks gift card.  Yes, we all drink $6/cup coffee by the gallon (or maybe that’s just me), but again, something missing with the wow factor.

This year, much to my delight, I snagged the best, best, bestest, coolest gift ever.  It is playful yet practical, fashionable yet useful, silly yet serious, dated yet timeless.  Take a look… 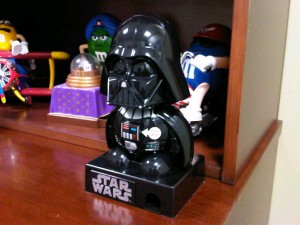 Yep, that’s correct, a Darth Vader bubble gum dispenser, already full of gumballs.  Oh how the light gleamed off his black plastic shell as he sat patiently awaiting my turn.  His “Try Me!” sign calling me like a beacon.  And the only person left to go after me is the most serious of serious people who frankly didn’t understand why the rest of us were drooling over Darth.  She of course chose the thermos, which I am 99% sure is the gift she brought herself.  As soon as she touched the thermos I called “game over!” and established a firm grip on Darth.

Geez, everyone wanted to touch him and play with him and get gum out of him, but let’s be fair, I was entitled to the first and the longest turn.  Only when I had hit his button over and over again to hear his heavy breathing, and I had 8-10 gumballs stuffed in my mouth, did I allow anyone else to look at him or hit his button, and even then only with direct supervision.

I don’t know what Santa brought all of you this year—but if it didn’t include this incredible item, it might as well be coal.

4 Responses to The Elephant In The Room