Space Odyssey: In The Year 20Never

I think by now everyone knows about my predilection for reality TV.  Every once in a while, Dan gets to use the TV, and he watches that genre commonly known as Bad Science Fiction.  After careful observation, I’ve learned that garden variety Sci-Fi TV is typically just a soap opera that happens to be set in the future, and has even cheesier sets.  Granted, I haven’t watched soaps since college, but I’m guessing they haven’t changed much.

Doppelgangers?  Ask any soap fan and they will tell you that good characters always have an evil twin who slinks into town and wreaks havoc.  Someone is almost certainly going to be tricked into sleeping with the evil twin, and then there will of course be a wrong-twin offspring.  In Sci-Fi they alter this only slightly; it is an alien disguised as a human that cross-breeds with a human to produce an even worse spin-off show.  Yawn.  We’ve seen it all before.  It is not unusual for a character in a Sci-Fi show to have his or her memory wiped by aliens.  Amnesia anyone?  A soap opera staple since before even I was born. The stuff Dan watches has love triangles, betrayals, dramatic death scenes…sound familiar?

And what about the science part of Sci-Fi?  Honestly, not much has changed since the original Star Trek days when Captain Kirk sat at that poorly constructed cardboard Bridge.  Lots of dials and lights and bleeping and vague discussions about gamma rays and parallel universes.  Nowadays they throw in avatars, too.  Totally lame.

So why do men, in particular, continue to watch this crap?  Well, the women are always wearing skin tight, skimpy “uniforms.”  The male aliens may look disgusting and slimy, but the female aliens are always able to morph into some kind of sexy vixen, a la Barbarella. 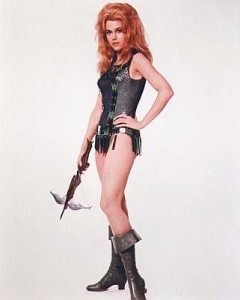 The other day Dan was watching something where the men were all fully clothed but the women were essentially naked, painted to look like they had bright white skin.  It left little to the imagination.  I pause the show and tell Dan that the women look essential to the plot line.  He emphatically agrees.  The show seems particularly bad, worse than the usual; my suspicions are confirmed when suddenly, apropos of nothing, two of the women start making out.

There’s another rule too; when there are hot women, the men have to get violent, I guess to showcase their incredible virility.  So the show is toggling between a scene with two men in some kind of laser sword battle and the scene with the two women who are really, really getting to know each other rather well.  I ask Dan how the two scenes are related, either to each other or the alleged plot, and he tells me it’s  complicated; over my head.

All I can say is that Gratuitous Alien Sex must be a terribly important scientific concept. And a great name for a band.

Like Loading...
This entry was posted in Uncategorized and tagged Culture, Drama, Imagination, Marriage, Television. Bookmark the permalink.

4 Responses to Space Odyssey: In The Year 20Never