Papa’s Got A Brand New Bag

Our cat Janet, as I blogged about here , really loves bags. My husband Dan, or as I sometimes call him, Captain Environ-Mental, uses bags that are thermulated, recycled, recylable, organic, paba and gluten-free…you name it; and Janet loves them all. So when Dan got home yesterday afternoon after his 6 hour marathon grocery shopping trip; first, we still didn’t have any food in the house, and second, Janet immediately jumped into each bag as it was emptied.

She jumps into the bags while they’re still on the counter, and being a not particularly bright critter, inches herself off the counter into a brief free fall before she lands (of course) on her feet, still inside the bag, nonplussed. It cracks us up, but we have to pretend we’re laughing at some witticism, not at her, because she’s sort of sensitive.

But forget Janet. It was Dan who was in rare form yesterday afternoon, because with a totally straight face he tells me “You know the Romans used bags to catch lions.” And I roll my eyes to the high heavens. “No really, I read about it, uh, somewhere.” Now typically this means he read about it on the internet, the world’s most reliable source of news and information. But just for fun I played along and asked “So, paper or plastic?” and without skipping a beat Dan said “Well, I think they used some kind of canvas or cloth.” I asked if they caught a lot of lions like that and he said they did because they needed them to eat Christians, but some weren’t hungry and curious enough to go into a bag so they just wandered around eating Christians, freestyle. No, I didn’t ask how the lions knew who was a Christian because that’s the set-up of all time and it would have just been too easy.

I was still dubious. It occurred to me that lions are not native to Europe. Wouldn’t traders have captured them in Africa and brought them already in captivity? When I question Dan he says with authority, “Well, some, sure, but back then there were still some lions in Europe. Like in the Black Forest.” He can make up this BS as fast as I can ask about it.

So just for the hell of it, and of course in the interest of bringing you quality comedy, I searched the internet for “How Romans caught lions.” Oddly, the first site to come up was bodybuilding.com, where the elite internet intellegentsia congregate. Here are some of my personal favorite answers:

“Cheese on a ferry”

“Snakes on a plane”

“You catch the young ones and raise them, it’s easier”

“They went up to the lions and put their ass in a choke hold, alpha status”

OK, I’ve laid down the gauntlet. Anyone else have any bright ideas? I hate to encourage Dan…but this is fun. 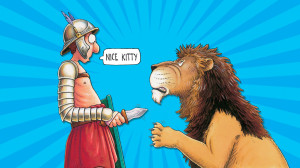 5 Responses to Papa’s Got A Brand New Bag