As recently as last week, yours truly was whining and complaining that it did not feel like winter. I know, it’s shocking to hear that I was whining and complaining, but every once in a while it happens. And then suddenly the news was filled with the impending doom of A WINTER STORM OF EPIC PROPORTIONS. Smiling news anchors cheerfully report that the world may indeed be coming to an end. At least in our part of the country.

I live right outside Washington, D.C., so I’m guessing that the rest of the country would say “good riddance!” if we were to dissolve into one big slushy mess of slimy politicians. I get it. But some immensely talented humorists/writers live here as well (hint, hint) and that would be a loss to at least a dozen mildly interested blog readers. Epic.

So we are doing what we can to plan our survival tactics. First and foremost, food. Lots and lots and lots of food. Therefore when I went to my neighborhood supermarket yesterday, it appeared that thousands of others flocked there as well. And as far as I can tell, we were all there to buy junk food (duuuh) and kidney beans, to make vats full of chili. I make a mean vegetarian chili, but it is absolutely mandatory that I have low sodium kidney beans to pull it off. Naturally they stock those on the top shelf, which by the time I got to the store had been ravaged. Sadly, I could see a row of cans at the very back of the shelf, but I had no means to get to them. I whimpered pathetically for a few minutes but no offers to help. That means I will only be able to make half a vat of chili with the stuff I have on hand, and I guess half a vat is better than none.

All I can say is heaven help us if there’s ever a real crisis, because the city’s supply of Oreos and other essentials will be wiped from the shelves in record time. When I finally got my groceries pulled together, I came around the corner and found this: 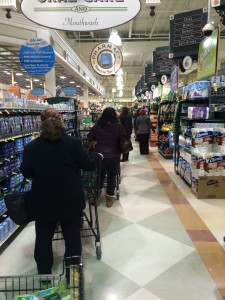 A mere 45 minutes later and I was on my way! Once home I flipped on the TV to find that out local NBC affiliate has a whole new Type of Snowfall Early Warning System. Check this out: 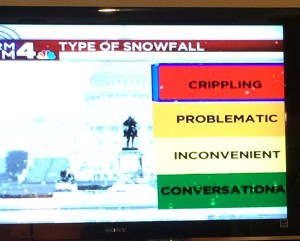 They were reporting that over the last hour they had upped the forecast from Problematic to CRIPPLING. Certain Death and Destruction. Surely only the strong will survive. That does not include certain humorists/writers. At least I’ll go down in a pile of under-beaned chili and cookie crumbs.

In the meanwhile no one bothered to notice that were getting a dusting of snow right at rush hour last night. A Barely Conversational amount according to our new scale of measurement. Not even enough to cover the grass in my yard. Still…my brother Barry called in a report from the Beltway that was not good. Not good at all. His average speed was, well, imperceptible, and people were abandoning their cars! WTF? It begs the question, where do these people go? Have they been teleported somewhere? And how will they get their cars back? I mean, you can’t just stroll down the side of the Beltway. Also, those people I wrote about recently who can’t be bothered to turn on their headlights in the rain have now adopted a practice of driving with their flashers on. According to Barry, who is a very reliable source, it’s become A Thing.

So I’m grateful that Dan and I were both snug at home when the roads came to a screeching halt, over a dusting of snow. Directly from this morning’s Washington Post:

From every corner of the region and into the wee hours of the morning, from every highway and byway, motorists vented their anger and frustration that they were still out there — at 1 a.m., then 2 a.m. and still at 3 a.m. — because of ice and untreated roads, from a modest early-evening snowfall that came and went in a few hours.

So Conversational Snowfall was actually Crippling Snowfall. We’re going to need a thesaurus to come up with a category for the storm coming tomorrow. Perhaps we go from Crippling to Epic to Life Altering to Abandon All Hope. I’m going to go take cover now.

Like Loading...
This entry was posted in Uncategorized and tagged Culture, Drama, Stupidity, Weather. Bookmark the permalink.