For many years I had a basic old school alarm clock. It displayed the time in big red numbers. There was a set time button, a set alarm button and a snooze button. There was an hours button and a minutes button. Then there was a button you could slide, alarm off or alarm on. This is the kind of thing I can operate. Set. On. Off. 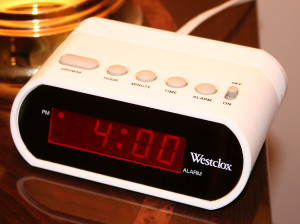 But they just don’t make things to last like they used to. After only 35 years, the damn thing broke. The time started running fast. Like an hour fast, then minutes were clicking by like seconds. Still I clung to my alarm and tried to make do.

Of course, it was inevitable. It happened. Dan said it was time for a new alarm and he came home with what I can only describe as a contraption. I guess it told time and had an alarm but it had dozens of buttons all of which were labeled something helpful like CMPTQ or SDZXC. 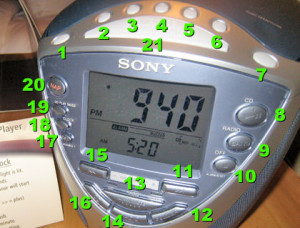 I had not a clue how to operate it. And Dan trying to teach me something typically ends badly. Very badly for him in fact. By day two I was threatening to throw the thing out the window. By day three I had it in hand and was headed to the window and Dan had to gently take it away from me and put me back on my meds. It was officially over for me and this alleged alarm clock. I don’t know what Dan did with it but it’s gone.

In its place is a simpler alarm clock but it’s not simple enough for me. I am simpler. I mastered the huge snooze button no problem. But then I couldn’t figure out how to turn it off completely. I just sat there like an idiot hitting snooze every 9 minutes. I mean exactly like an idiot. Dan smirked. This is bad for Dan’s health and you’d think he would know better by now.

In a voice reserved for a small child or a very, very stupid adult, Dan showed me the button that would turn the alarm off. Fine. Except, the next morning the button didn’t work. I got frustrated and started hitting every button on the stupid thing but nothing worked. Dan came over and gave me that look that says “you’re a hopeless idiot but I love you anyway.” I responded with a look that says “I hope no one poisons your dinner tonight.”

The next morning, Dan sort of stalks me and watches me hit the button he showed me to hit. He sees that the button does not work. So I do the unthinkable: I read the manual. Yes, the manual that takes 62 pages to explain concepts like set, on and off. I tell Dan the manual says I’m supposed to hit a different button, not the one he told me to hit. In his most confident voice Dan says the manual is wrong. I quietly slide him the manual. He looks at it. Twitches his mustache. Sniffs a little. “Ohhh. Umm hmmm. Well, I see what happened here. You would hit the button I showed you if uh, mumble mumble mumble, but otherwise I guess you hit the button they show here.” Yeah. No kidding.

Morning rolls around, I hit the button that both the manual and Dan now agree is the right one. The alarm continues to go off. Now we’re both steamed. I ask Dan if we can throw it out the window together, and I can tell he briefly considers it before regaining his composure and deciding that the real problem is that it needs new batteries. Sure.

I know what you’re thinking-I can just use the alarm on my phone. And right you are. It is easy to use, reliable, convenient. But what’s the fun in that? And even more importantly, actually solving the problem provides no entertainment value at all. And I would hate to deprive everyone.

Like Loading...
This entry was posted in Uncategorized and tagged Family, Humor, Marriage, Middle Age, Stupidity, Technology. Bookmark the permalink.

8 Responses to Keep It Simple Stupid!