Much has been written about this government shutdown and the idiot hyenas we call Congress (with all due respect to hyenas). I won’t attempt to out-pundit or over-think or under-mine the situation. But if you want to know how this shutdown is affecting people directly, welcome to my home.

Dan has been home since Tuesday. Although I wrote a book (did I mention that?), unless thousands of you immediately go out and buy three copies, we’re not paying the mortgage with royalties. But we’re luckier than a lot of people affected by this situation; so far we are in no danger of losing our basic necessities: food, shelter, fuzzy mice and satellite TV.

Here’s the tragedy no one wants to talk about-the marriages falling into ruin over this forced togetherness. I love my husband. In fact, I love my husband enough to let him go…to work, every day, please, please, please. If I ever had a worry that Dan might be seeing a little hottie when I thought he was at work, well, apparently not. No gambling problem either, I guess. Nope, it would appear that if he is not at work he has absolutely nowhere to be.

I don’t begrudge Dan his afternoon snack, really I don’t. But in the history of mankind has anyone ever chomped on pretzels ANY LOUDER than Dan? I think not. Of course I can’t think right now because of all the racket in here. 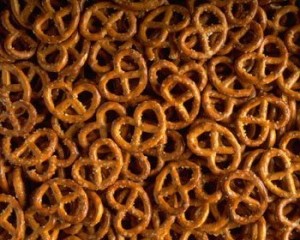 And how many of you routinely giggle while reading Scientific American? Fine, maybe something is funny, but am I allowed to ignore it? Not a chance. Dan chuckles and reads something to me that might be considered science humor, if I understood a word of it. I’ve learned to giggle nervously in the hopes that Dan will shove another pretzel in his mouth and go on about his business.

You know what’s worse though? When Dan isn’t reading or chomping on pretzels, and I’m sitting in the kitchen working on the computer, minding my own damn business, and he feels the need to sneak up behind me and say “Whatcha doin’?” And I screech and come flying out of my chair. And you know what Dan has to say about that, when he finishes laughing at me? “Geez, are you deaf and blind, you knew I was right here.” For the record, yes! I am deaf, I am blind, and pretty soon he’s going to be wishing I was dumb, because a stream of curse words seem to be spilling out of my mouth.

It’s not just my routine that’s been upset either. Consider the cats. How is Helen supposed to keep up on her beauty sleep when Dan is parked in her recliner all day? How are Jack, Janet and Chrissy supposed to tell the difference between the crackle of a bag of pretzels and the crackle of a bag of kitty treats? And nothing is sadder than seeing them put their little paws over their little ears because Daddy is crunching too loud.

So it is not for my sake that I ask, but on behalf of my poor kitties, please get my husband back to work. Way, way, way back to work.