Gone To The Dogs

A couple of years ago, thanks to our friends who own the beautiful Byrne Gallery in Middleburg, VA, we had the opportunity to meet Yuri Gorbachev.  A prolific artist, his paintings hang everywhere from the White House to the Louvre.  He’s pretty good and stuff.  Among his collections, there are many Cat/Russia themed pieces.  Given that my two obsessions are cats and all things Russian, you can see why I’m so enchanted with his work. Yes, he’s related to that other Gorbachev.  Plus, when he’s back in Russia he can see Sarah Palin from his house.

We quickly discovered that Yuri has a personality bigger than life.  Every now and again, apropos to nothing, he would stand very tall and declare “I am Yuri Gorbachev, famous international artist!” 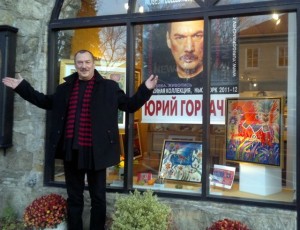 He’s very charming and clearly has excellent taste in women because he kept kissing my hand and telling me I was beautiful.

If you buy one of Yuri’s paintings, or even just a book, he will draw something special for you on the back.  We bought a painting that night and he drew an elaborate elephant on the back.  He also wrote and drew in a book for us. 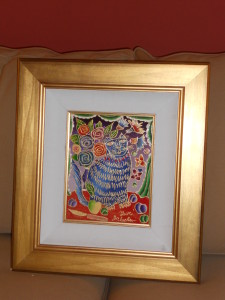 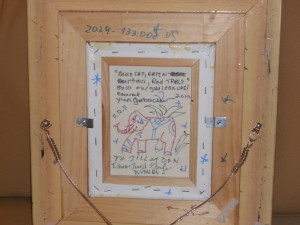 I was really enjoying myself before an uptight little woman started whining in my ear.  She was telling me how her dog was very famous; he had been on The Today Show and was now brokering world peace or something.  The woman then pulled out a book she bought that evening and showed me Yuri’s drawing on the inside cover.  She said “I asked Yuri to draw my dog.  This doesn’t look anything like my dog!”  She held up a picture of her dog next to the drawing to make her point.  She was actually annoyed that Yuri had drawn a stylized dog in his hallmark style.  As if he was an artist or something.

The woman told me she was going to go ask Yuri to draw a new dog that looked just like her award-winning dog.  I put on my “now I’m talking to a crazy person” voice and tried to calm her down.  When that didn’t work I just flat out started begging her not to go talk to him about the dog, but she was dead set on her path.

I realized if I kept talking to her Yuri might find me guilty by association, so mid-sentence I just turned my back and put some distance between us.  Still, I was close enough to see her showing Yuri the picture of the damn dog and comparing it to Yuri’s beautiful drawing.  The woman was fixated on the ears, which either should or should not have been floppier or something.

And people say artists are crazy?  Do you think Mona Lisa’s mother ranted at Leonardo da Vinci that her daughter’s smile should be wider?

Yuri grabbed the book and carefully studied the picture of the perfect pooch.  He quickly sketched some embellishments on the dog and showed it to the woman.  But was she happy with that?  Of course not.  She was scowling and telling Yuri the drawing still wasn’t right.  I was really hoping he was going to throw the book back in her face, but he just kept on smiling while he completely ignored her and started talking to someone who was actually buying one of his pieces.

For some reason she came dashing back over to me.  “Do you believe this?  Do you believe what Yuri did?”  I quite honestly answered that I really couldn’t believe it.

2 Responses to Gone To The Dogs