A recent guest in our home looked at Mrs. Helen Roper sleeping on a chair and asked if she was pregnant. I was taken aback. I said no, she just looks f-a-t in that fur. Helen looked hurt for a minute or two, before dozing off again. That’s exactly what I did the last time someone congratulated me and asked me when I was due. I get it, OK, no more empire waists! 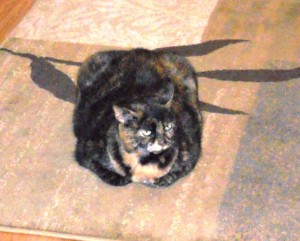 But poor Helen never gets a break. Dan got me a Fudgie the Whale cake for my birthday, and as we were admiring it he pointed out that it bore some resemblance to Helen, in its whale-like perspective. I covered her furry little ears so she wouldn’t get her feelings hurt. 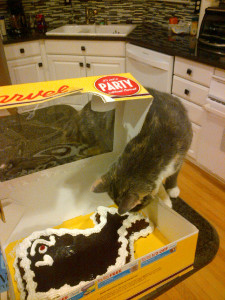 We had little sugar replicas of our kitties on our anniversary cake, and I can’t tell you how many people remarked that the sugar Helen seemed slimmer than the real Helen. I can only be grateful that Helen wasn’t around to overhear any of those comments, and she doesn’t read this blog. 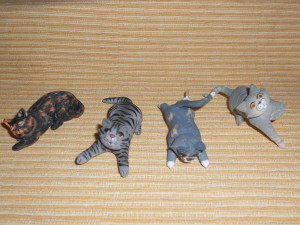 We hear a lot about bullying these days. Bullies at school, bullies at work. But what about cat bullies? I’m worried about Helen’s self-esteem and body image. She was so distraught about all this I was worried about a hunger strike, but thank goodness she did manage to waddle over to her food dish for a little sustenance.

I feel guilty about the whole thing because if we’re totally honest, Helen gets this from my side of the family. I mean, she and I are both…big-boned and we both retain a lot of water. Like gallons and gallons. To be totally honest, Janet has also put on a pound or two, and I noticed her fur is a little tight around the middle, but I think she still feels good about herself. I’m hoping no one says anything stupid in front of her and makes her feel self-conscious.

Dan, Jack and Chrissy maintain their svelte figures, but they try not to gloat. Can’t we all try to be a little kinder today?

Like Loading...
This entry was posted in Uncategorized and tagged Animals, Diet, Exercise, Family, Fashion, Health. Bookmark the permalink.