Back in the USSR, Part I

Dan and I traveled to Moscow three years ago.  Moscow is not what I would call a charming city; it’s imposing with its Stalinist skyscrapers and 60’ high Kremlin walls.  Moscow has a look that says don’t f*** with me. 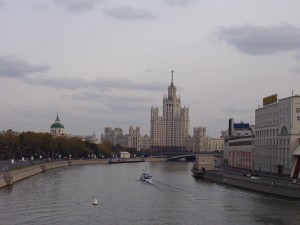 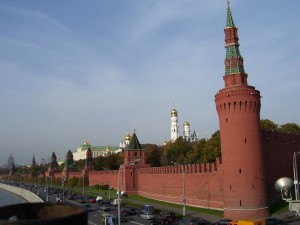 More than 20 years after the end of the Cold War, it’s still a hassle to travel to Russia.  We’d been to St. Petersburg a few years prior to our Moscow trip, so we already knew the drill.  We needed to fill out a half dozen forms and submit them to the Russian Embassy with our passports. It’s up to the traveler as to how quickly the paperwork is processed, based on a tiered fee system.  For enough money, you can have everything back in a week.  For a nominal fee, you can never see your passports again.  Totally up to you.

Americans traveling in Russia must also have a sponsor who agrees to be responsible for them while they’re visiting.  For a small fee your exorbitantly expensive hotel will forget to provide you a letter.  For an exorbitant fee they will send the letter right away.  We decided to hire a guide and driver for the time we were there, so we needed to present a confirmation letter with itinerary from the tour guide.  Guess how you get that?  Have checkbook, will travel, and off we went.

You know that sinking feeling you get when everyone else on your flight has collected their things and are long gone, and the luggage carousel is going around and around, with one sad little duffel bag on it?  It feels worse in Moscow.

We found our way to the lost luggage office, staffed by about a dozen very intimidating Russian grandmas wearing babushkas and fussing at each other.  We knew exactly one Russian word, spasibo, which means thank you.  For future reference, if you stand in the middle of the lost luggage office in Moscow saying spasibo over and over again, you don’t get your luggage, and everyone starts to get pretty grumpy.

We completed an endless form only to find out they needed it in triplicate, but there was no carbon paper.  There were two or three copiers in the room, but when we pointed to those all the women shouted NYET and started wildly gesticulating.  Well then, never mind.  So we filled the whole thing out again, and then again.  Finally, with no assurance whatsoever that we would ever see our luggage again, we found our way to our hotel.

In the morning, our luggage still hadn’t arrived but the concierge was on the phone with the luggage office uttering what sounded like a string of really good Russian curse words.  We felt reassured.  Our guide and driver showed up bright and early, and off we went in our dirty clothes.

Yuri was a pleasant, quiet guy behind the wheel of a blue Renault.  Ivan was our guide, whom we quickly dubbed Ivan The Studious.  He was a really sweet guy and was very proud of his heritage.  Museum after museum, every single room, every item in every room, every item in every case in every room…you get the idea.  It’s not like I didn’t want to see a room full of beautiful samovars, but after looking at about 200 of them, it’s enough. 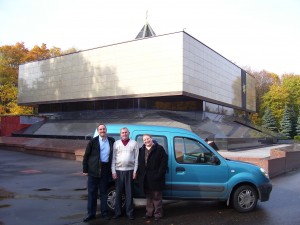 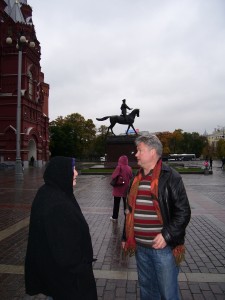 Russian rulers have a rather bloody history, with more plot twists and turns than a telenovela.  The most typical form of death for a Tsar was murder.  Whether poisoned, stabbed, bludgeoned or shot, it was typically at the hands of a relative or elite guard.  Ivan The Studious really brought that point home as he told us of each leader’s reign.  A typical ending to Ivan’s Tales of the Tsars was “he murdered two of his sons, his wife stabbed him, and the one remaining son poisoned his mother and ascended the throne at the age of 12.”  He would go on, sadly, “and then he himself was killed by his cousin, on his 15th birthday.  The cousin ascended the throne at age 38 and of course suffered a bloody death when he was murdered by his own mother at the age of 42.”

I’m one of those people who feels compelled to make noise in the library and laugh when it’s completely inappropriate, and Ivan was so sad and so serious that I was ready to break into a fit of giggles, so I walked away to take a third look at samovar number 147, which suddenly seemed very amusing.

After a truly enlightening morning, it was time for lunch.  We explained to Ivan and Yuri that we are vegetarian.  Yuri, alarmed, grabbed a sack from the front seat and explained that his wife packed him lunch every day, so he was just fine thanks.  Ivan was deep in thought.  He didn’t know of any vegetarian restaurants.  We explained that really all we needed was someplace we could get bread and cheese, and we would be fine.  He still looked concerned, but we wandered into a nearby restaurant.  He said something to the old woman behind the counter and the next thing I knew the woman shooed us out of the restaurant.  We tried a couple more restaurants with similar results.  We asked Ivan what was going on, and he said we should not be offended but no one wanted to serve vegetarians.  No offense taken, until I saw a family of lepers and zombies (mixed marriage) being warmly welcomed into the restaurant that just kicked us out.

We told Ivan there was no need to announce that we were vegetarian, but he was beside himself.  So we ended up putting on hats and dark glasses and sneaking in to a cafeteria where we got bread, cheese and big cups of mushrooms that had been smothered in cream and baked.  Delicious, and the hell with the other places.

We filled the afternoon with two or three more museums, and headed back to the hotel to find the concierge was still on the phone spitting out insults in Russian…and we realized that we would be spending the evening washing our clothes in the tub.

Can you stand to hear more?  Back in the USSR, Part II coming soon to a blog near you…

Like Loading...
This entry was posted in Uncategorized and tagged Diet, Family, Humor, Irreverent, Travel. Bookmark the permalink.

6 Responses to Back in the USSR, Part I