We had the opportunity to once again visit with our favorite artist, Yuri Gorbachev, at our favorite place, The Byrne Gallery. I blogged before about a certain incident that happened with a woman I shall call Dog Lady. Now we all know I love my cats, but Dog Lady absolutely lives for her Dog (yes, when she refers to her dog you just know she’s saying it with a capital D) and also seems to feel that world renowned artist Yuri Gorbachev lives for her Dog.

I thought I’d seen the worst of Dog Lady before…but how wrong I was. This time around, I heard her before I saw her…who else would be talking about Dog racing in the middle of an amazing art show? I managed to steer clear of her at the gallery, but at dinner afterwards, no such luck. Dog Lady plopped right down across from me.

Apparently, Yuri wasn’t going to have much choice of where to sit either, because she stuck to him like white on rice and got him situated next to her. Yuri is very entertaining and dove right in to funny stories about his life and times. For example, let’s suppose that an extremely well-known performer happens to be his neighbor in his West Side NYC apartment. Not really a has-been, but not of the moment either, and famously reclusive. Let’s further suppose that said performer gets lonely and depressed and hangs out in the lobby of the building looking for people to talk to. In that circumstance, when the doorman is fed up with babysitting Ms. Fabulous, he calls Yuri and tells him he is needed in the lobby to help talk her off the ledge.

“Why me?” he asks, and we all nod along knowingly. Who else could it be, when he is so charming and engaging? So in between being an unbelievably successful and talented artist, he takes his turn talking to a depressed actress/recording artist/diva.

In the course of telling the story, Yuri tells us where he lives in NYC, and I made a comment about where I lived in NYC. Dog Lady says to me, without a hint of irony, “Oh, that explains why you’re so aggressive. You’re a New Yorker.” OK, if by “so aggressive” she means politely listening to the guest of honor while scarfing down some delicious eggplant parm, then yes, I guess that’s me. I nicely, and in a completely non-aggressive fashion point out that I lived in NYC for less than a year, and was born and raised here in DC. I got The Look, and possibly a tongue click, it’s hard to say. After that Dog Lady commenced to calling me “New York” when she wanted my attention, which was frequently. I commenced to calling her Dog Lady, and as long as I was being accused of being aggressive, I may have bark-coughed a few times.

So Dog Lady finishes her meal, and despite the fact that Yuri hasn’t been able to touch his food and his plate is growing cold, she shoves her phone in his face and starts showing him endless pictures of Dog. There is talk of commissioning a portrait of Dog. 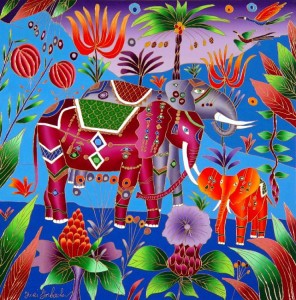 But apparently what Dog Lady wants him to paint for her is more like this: 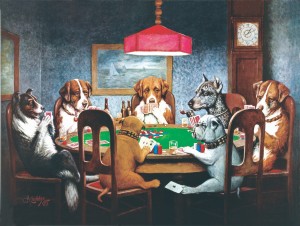 Crazy, right? I mean, maybe Dale Chihuly is available to change the bulbs in her chandelier so that Dog has plenty of light. 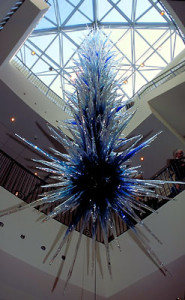 Whack-a-doodle. But it’s not enough for Dog Lady to pester Yuri non-stop with Dog pictures. She also wants to snap pictures of him. She hands me her phone (although with me being “so aggressive” maybe I just grabbed it out of her hand), and asks/tells me to take a picture of her with Yuri. She tells me three times to hit the little button with the camera on it. Yep, got it. Then she tells me her phone is extremely sensitive (much like Madame Dog, apparently) and I must be careful not to touch anything else. I take the frackin’ picture, and of course, her eyes are closed. Well, you can guess who got yelled at for that.

When she started talking about Dog again, I told her I remember her telling me all about Dog, and that I thought he was tied up right now curing cancer or studying with the Dalai Lama or something. I mean, you want aggressive? Oh, I can give you aggressive with two twists of acerbic wit and a dash of sarcasm. Snap. Dog Lady gave me a Death Stare that rivals only my own, but I didn’t blink.

Trust me, many other antics ensued, but I’ve already rambled on long enough. Besides, I think Lassie re-runs are starting now…

Like Loading...
This entry was posted in Uncategorized and tagged Animals, Blogging, Celebrity, Culture, Humor, Irreverent, Social. Bookmark the permalink.