WTF Wednesday: Why Is Everyone Worried About What’s Under Someone Else’s Dress?

This transgender bathroom situation is a wholly manufactured problem. There is an implicit social contract when we use the restroom; we assume we’re all there for the same purpose, and no need to ask for birth certificates. It never crossed anyone’s mind to be concerned because there was no reason to be concerned. But the North Carolina legislature poked a hornet’s nest, and now we’re all getting stung. 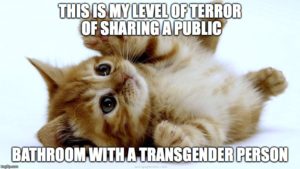 Like Loading...
This entry was posted in Uncategorized and tagged Childhood, Culture, Drama, Irreverent, Politics, Stupidity. Bookmark the permalink.

16 Responses to WTF Wednesday: Why Is Everyone Worried About What’s Under Someone Else’s Dress?