WTF Wednesday: Who Says A Girl Can’t Be President?

I was nine years old when Nixon resigned. I remember my parents plopping me down in front of the TV and telling me I was seeing history. Which I really didn’t understand; I was a kid and just wanted to go outside and play, but I went along with it because it seemed super important to them. Plus my mom gave me that look. You know the one.

Since then I’ve witnessed a lot of history, good and bad. Like the summer I got down to my goal weight. For, like, two entire weeks or something. Momentous stuff like that.

I hope that little girls (and boys!) everywhere were made to sit down in front of the TV last night and listen to Hillary Clinton’s speech. The truth of the matter is, even now, in 2016, most little kids don’t think a girl can be President. Because all they ever study are all the men, white men until 2008, who have occupied that position. So it looks pretty stacked in their favor and everything. 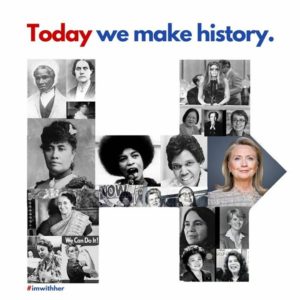 I’m not sure the notion ever crossed my mind when I was a little girl because for all I knew it was unconstitutional or something. I mean, that’s how far out of the realm of possibilities it seemed. I remember my freshman year of college when I was really properly introduced to the concept of feminism. I’m not sure why, but somewhere along the way “feminist” became a bad word. Something even women didn’t always cop to, let alone men. I never stopped copping to it. Ever. I mean, really, incessantly feminist. As just one small example, call me MRS. sometime and hear my 12 minute rant on how I don’t need an R in my title to indicate I am legitimate and owned by a man. Small example; I could give you many more but then you might stop reading and it would hurt my delicate little feelings.

As a side note, if you just crawled out of a cave and send out cover letters addressed to Dear Sirs, rest assured that at least 50% of the time someone who makes 70% of what a Sir makes for doing the same job is pretty quickly tossing your dumbass “credentials” in to the trash. But I digress.

Last night was a major moment in our country’s history. And not just because Chris Matthews nearly passed out from excitement. But as long as we’re on the topic, he pretty much nearly did. And how much do we love Rachel Maddow and James Carville? A lot. But I think I just digressed again.

Here’s what I know: Bitches get shit done. They just do.

Madame President will be bringing our country together rather than tearing it apart. So get on board folks. And as Dan pointed out the other night, she will be making the same salary as any man would in that job. I’m pretty sure it’s too late to go back and decide that she will be subject to a “uterine discount” of 30%. It’s too late for that, right?

P.S. Trollers and Haters: I get it. You have a different opinion. This is my blog. You can disagree with me. I guess. If you must. But let’s all be civil, while keeping in mind that I am 100% correct. And take two minutes to watch this video and absorb this moment in history. Because, WTF, we’ve got this.

Like Loading...
This entry was posted in Uncategorized and tagged 2016 Election, Business, Celebrity, Childhood, Culture, Politics, Television. Bookmark the permalink.

16 Responses to WTF Wednesday: Who Says A Girl Can’t Be President?