WTF Wednesday: Are They Really All Conspiring Against You?

I have been on social media a lot lately, and obviously politics is a hot topic. I try to stay above most of the fray while of course promoting Hillary Rodham Clinton, the woman who will be the next President of the United States. [No comments trollers; you can’t change my mind and I can’t change yours].

I get that people have different political opinions, because they haven’t yet figured out that mine is correct. What I really, really can’t understand, are the conspiracy theories. And boy are they out there. Not just current politics, but all kinds of other crap beyond the usual JFK assassination and the government hiding space aliens. Some of them are not just idiotic but dangerous; I have read a number of accusations that climate change is “the biggest hoax ever.”

My question is, where do those who conspire against us find hundreds of people who will both play along, and take the secret to their grave? I mean, hundreds of people is what it would take to pull off most of this stuff. And let’s say you could somehow motivate these people to go along with you, are they really going to continue to keep it a secret when they could sell the story for millions of dollars?

To continue to follow this new form of “logic”, these conspiracy theorists not only believe that all the people involved will be compliant, but also believe a dozen different, independent sources that debunk their crap are all part of the conspiracy. So basically, all the national media and Politifact and Snopes and other sources are all part of a grand conspiracy. That not a single investigative journalist would break from the pack and get the story of a lifetime. A couple of bumbling idiots broke into a DNC office 45 years ago and a handful of super loyal people covered up the direct connection with the White House; even they pretty much immediately had a leak. What would have persuaded Woodward and Bernstein to look the other way on that story?

The theorists theorize that people are being threatened with something if they don’t go with the program. And that the conspirators are so powerful, and so good at what they do, that no one will break the code. Yep. Sure. 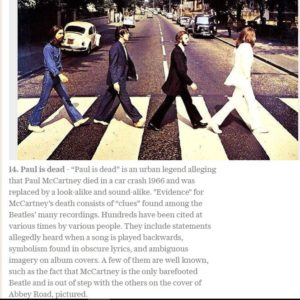 Paul is very much alive. Still. 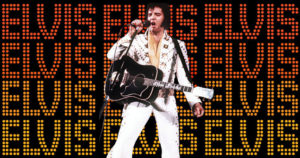 Elvis is very much dead. Still.

Anyone who has ever shared a secret with more than two people knows that typically no one can keep the smallest secret. I mean, not for long. More than a handful of people, and you can count on a leak. Intentions are usually good, but not always; either way, gums are flapping. We are social animals. We like to share stuff. Except toothbrushes. No one wants to share a toothbrush. Also, I want to note that I am never, ever the one who spills the beans. Because I am morally superior. At a bare minimum if I do blab, I at least let the other person know right away. Because it makes me them feel better.

Like Loading...
This entry was posted in Uncategorized and tagged Celebrity, Culture, Drama, Imagination, Media, Social Media. Bookmark the permalink.

10 Responses to WTF Wednesday: Are They Really All Conspiring Against You?