Which Way Do You Roll?

I went out to dinner with a couple of friends tonight; one of the friends is, of course, a gay man.  He bowls in a gay bowling league, which I could only dream of joining.

They’ve been looking for a 4th man to round out the team, and where else to find a gay bowler than on Craig’s List?  So they get a response from a gentleman (let’s call him Bob), and one of the teammates (let’s call him Sam) arranges for them to meet.  Bob responds by asking Sam to send a picture of himself so he’ll be able to spot him at the coffee shop.  A little stalky-creepy, right?  How hard is it, really, to find a gay bowler in a coffee shop?  Wait, don’t answer that!  It sounds like a rhetorical question that will end in a punch line.  Bear with me, still trying to think of one.

So Bob’s a great guy.  A family man in fact; he is married.  To a woman.  Now, we all love a straight man secure in his masculinity, but it’s a little over the top to think that he’s so darn secure that he’s going to join a gay bowling league.  Nonetheless, my friend pointed out they would never exclude someone just because he was straight (although morally it should be illegal for straight people to marry; fortunately the team members are very tolerant).

We’re sort of guessing he told his wife he is joining a league, but left out the part about it being a gay league, and we started imagining the sort of sitcom hilarity that could ensue.  Like the wife telling Bob to invite his bowling friends and their wives over for dinner.  She’s expecting beer-swilling bowling buddies 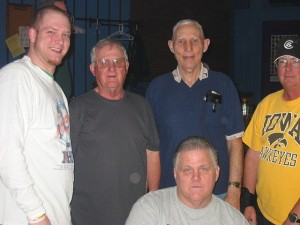 but these are the men who show up 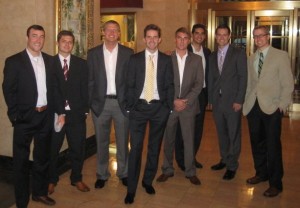 impeccably dressed and asking a lot of questions about the window treatments, calling her honey, sweetie and doll and asking who she’s wearing that evening.

[Yes, this is me stereotyping gay men just like I stereotype Jews and lawyers and everyone else.  Otherwise it’s not funny.  Get it?]

It could be a lot of fun to watch, but thinking that when the wife asks about the team name, and they say Four Shades of Gay, she might have to wonder.

Like Loading...
This entry was posted in Uncategorized and tagged Humor, Irreverent, Marriage, Social, Television. Bookmark the permalink.

2 Responses to Which Way Do You Roll?