I have a little book of postcards called Breaking Bad News With Baby Animals.  It is absolutely inspired.  One postcard features an adorable kitten playing with pink, blue and yellow balls of yarn and says “Your baby’s ugly.”  Another has a Dalmation puppy and says “It’s not me, it’s you.”  A picture of two Golden Retriever puppies brings news that “It’s only sunny because there’s a hole in the ozone layer.”  And if you have to hear the news “I’m leaving you for the nanny” why not soften the blow with a picture of two Chocolate Lab puppies frolicking in the grass? 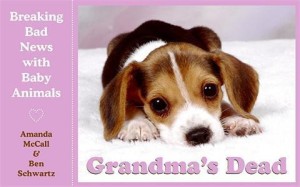 I love this concept, but why stop at baby animals?  I’m envisioning a whole collection of greeting cards for business and personal use.  For example, picture a card with rainbows and unicorns and a leprechaun saying “Today’s Your Lucky Day!”  On the inside it would say “We’re Inviting You To Find Your Happiness Elsewhere!”  All credit to Disney, a corporation known for never firing anyone, but inviting lots of people to find their happiness elsewhere.  That card would be part of the You’re Canned Variety Pack, which would also include a card that says “Surprise!” on the front, and on the inside a little slot for a pop-up severance check.

The You’re In Big Trouble Variety Pack would include a card with a crying clown on the cover saying “The Party’s Over” and then the inside would say “We Need To Talk.”  And a perennial favorite, a picture of an electronic ankle bracelet with the message “Guess What?” on the front, and on the inside “You’re On Probation!”

For a more subtle message, how about a card with The Thinker on the cover that says “I’ve Been Pondering…” and on the inside “When The Hell I’m Going To Get Your Report!”  The perfect gentle reminder to an employee who missed a deadline.

Be sure and mail that last one right before you open the greeting card that your boss just sent you.

Like Loading...
This entry was posted in Uncategorized and tagged Animals, Business, Culture, Family, Humor, Irreverent. Bookmark the permalink.

10 Responses to Warm And Fuzzy Greetings!