To Chew Or Not To Chew: That Is The Question

Kitty dental drama. I mentioned before that Helen lost a tooth somewhere along the way, all on her own. Then it turns out that poor Chrissy’s teeth are rotting out of her head, and she has to have major oral surgery.

So last Friday Chrissy had any number of teeth pulled, as the vet recommended that was the best course of action to avoid continually putting her under general anesthesia to try to keep them clean and avoid infection. Sadness for my baby but it had to be done. 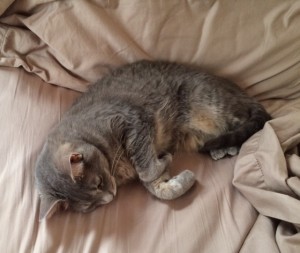 Naturally, Chrissy couldn’t have anything to eat after midnight the evening before her surgery. That means none of the cats gets anything to eat, because we can’t put food out and tell Chrissy she’s not supposed to eat it; but as soon as she was gone in the morning, I put food out again for the others. After 7 long hours with no chow, Helen, Janet and Jack were just barely able to summon the strength to drag themselves to the food bowl.

When Chrissy came home she was still disoriented and just running from room to room meowing. It broke my heart. And of course, Chrissy still can’t have dry food because her mouth is healing. So once again, nobody gets dry food. This is a big change because they are used to “open feeding” where dry food is always out, and they get a small amount of wet food each evening.

Now we’re giving them wet food three times a day but they are pining away for their crunchies. We even put out bowls of soft treats but they’re not having it. Jack and Janet keep circling restlessly around the kitchen. I know how they feel, I get like that at times too. And I still have open feeding. Way open. Wide open. Too open.

I put out more soft treats this afternoon but they turned their little noses up at it. As I was standing in the kitchen bemoaning the situation, Jack went over to the pantry and dragged out the bin of dry food. Then he sat and meowed. I mean, really? Still, I’m a sucker for that kind of thing… 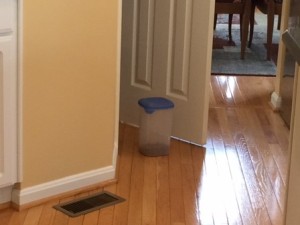 The food bin Jack dragged out

I don’t think I’m being at all dramatic when I say I am now facing a Sophie’s Choice type decision. I could put out some dry food for a short time, and not let Chrissy get at it, which is mean to Chrissy. Or I can let the other three tough it out until they can all have dry food. I called the vet for insight; she says I can put dry food out tomorrow. So I think we’re all just going to have to tough it out for one more day.

The good news, and most important thing, is that Chrissy is finally feeling like herself again. Now we just have to hope that the cats can make it through another day with only wet food, soft treats, lots of toys and warm beds. 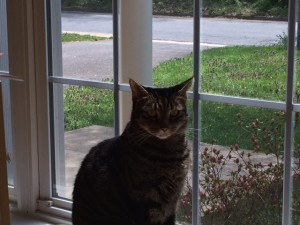 A sunny windowsill is nice, but I still want my dry chow!

Like Loading...
This entry was posted in Uncategorized and tagged Animals, Diet, Health, Imagination. Bookmark the permalink.

13 Responses to To Chew Or Not To Chew: That Is The Question