They Tried To Make Me Go To Rehab

And I was obliged to say yes yes yes. To something known as pulmonary rehab; a combination of education and physical exercise. Yep. My two least favorite things: thinking and moving.

So for two months, three days a week, I spent time at Inova Fairfax Hospital in both a classroom and a gym. When I first started rehab I was still working full time, making just getting to rehab a challenge in itself. At exactly 1:00pm, I would go down to the garage and hope that my car was not blocked in by several others. Screeching out of the garage right into midday traffic in downtown DC. After finally breaking free and making it over the bridge to Virginia, I had to zip around two different highways just to arrive at yet another parking garage. Wend my way up to the third floor where (and this is the cool part) we rehabbers had reserved parking. 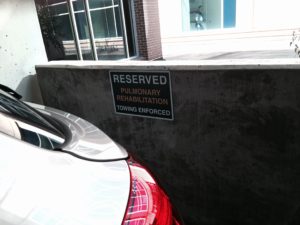 But remember, I was still in my work clothes, and hadn’t yet eaten lunch. So duck into a bathroom to change clothes, plop down in the waiting room, and pull a Smuckers Uncrustable PB&J out of my bag. Yes they are intended for children and yes I was known to take them to work for lunch. Don’t judge. So by 2:00 I was where I was supposed to be. Of course by that time I was exhausted and wondering why on earth I still needed to exercise.

In the classroom we learned about the cardiovascular system, lung anatomy, and various types of lung diseases. When I say “we learned” I mean of course “they learned.” Because I don’t understand any of this stuff. I have a very limited understanding of my own lung disease, and that’s about it. But in class I had to look at a plastic model of the lungs in mock awe, pretending it didn’t totally yuck me out. It totally yucked me out. There was a class or two on nutrition, which I followed in rapt attention while eating my Uncrustable. 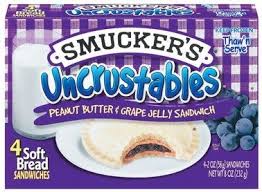 Then…then there was the gym. I’ll admit that it was cool because it was one-on-one instruction with various physiological physo-exercisists or some such specialty. What I know is that they were extremely knowledgeable about my physical condition (or lack thereof), my lung disease, and the equipment I was using.  And they came to learn, quickly, that I am a smart ass of epic proportions. The thing is, they are really good at what they do and despite my attempts to charm/annoy the hell out of them, and distract them from the task at hand, they plodded ahead and whipped my ass into semi-shape. Except for the times I was having a bad day and not well enough to exercise. In those few instances they took my sorry butt to the ER and dumped me there for a few hours to make sure nothing bad happened on their watch. If there is anything worse than exercise it is spending hours in an ER waiting to be seen by doctors who have never heard of PH disease.

We were a motley crew in the gym because we had to wear headbands with heart monitors and some people had oxygen and some of us had to modify various exercises so they were safe and effective. And some of us, mostly me, just look silly in a gym. We did get to listen to music while we exercised, and one of my partners in crime made an awesome soundtrack of breathing related songs, like “Every Breath You Take,” also throwing in Amy Winehouse’s “Rehab” which became sort of our anthem.

But overall, rehab for me was of course just an opportunity to make new friends and socialize with people who had no choice but to spend time with me. There were seven of us in my class, but I also bonded with a few people in the class before me because I am me. We all still keep in touch and have had lunch several times since finishing rehab. Everyone has a different lung disease and other health issues, so we each face unique challenges but all have an awesome sense of humor and the ability to laugh at our predicament. Three of us still exercise together twice a week in a private facility with a trainer who is one of those physio-exer therapist type people. She monitors us and keeps us safe, and the hospital is just a mile or two away. And we still get reserved parking. 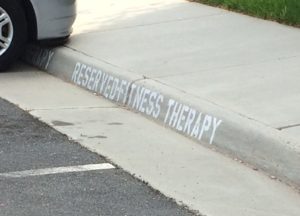 We had an official graduation, and one of my classmates brought cake. I love her for many reasons but also because, well, cake. 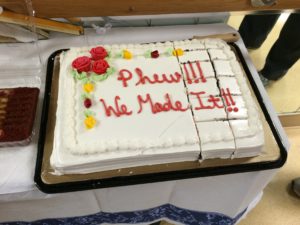 Unofficial awards were bestowed by another of my classmates, and my buddy and I received the Sonny and Cher Award for keeping the troops entertained. Proud moment.

So yes, I went to rehab. And now I’m hooked. 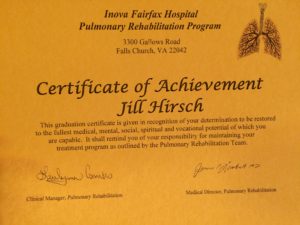 I am officially certifiable. No doubt.

Like Loading...
This entry was posted in Uncategorized and tagged Culture, Diet, Exercise, Friendship, Health, Music, PAH. Bookmark the permalink.

14 Responses to They Tried To Make Me Go To Rehab