The Springfield Bypass? It Passed Me By

This is slightly embarrassing, but I grew up in a place called Springfield. Cliché, I know. Springfield, VA, a suburb right outside of Washington, D.C. It was pretty typical suburbia; wide streets lined with trees, single family homes with decent sized yards, kids riding bikes everywhere. A taco place that was really a front for drugs. Outrageous secret after-hours parties at Pizza Hut. You know, the usual.

I lived in Springfield from the time I was two years old; returned home after college, and stayed at home while I attended graduate school. In the middle of all that Dan moved in to live with me in the basement after we got married. All just part of my glamorous and exciting past.

Like Anytown, USA, Springfield had a handful of major roads, a bunch of neighborhoods, and really fun-to-drive, wooded back roads. In high school I tooled around all those roads in my 1976 Oldsmobile Custom Cruiser station wagon, approximately the size of a Princess Fun Ship, and after college I downsized considerably to a Ford Escort. Way before the days of the internet and GPS, if you gave me an address in Springfield, I could probably find it.

When Dan and I finally emerged from the basement after I finished school, we moved a little closer to the city, to Alexandria. My parents sold their house and moved to the beach. I had little reason to go back to Springfield. But then, something bizarre happened. Someone started building something originally called the Springfield Bypass which then turned into a bigger project called the Franconia-Springfield Parkway which then turned into an even bigger project called the Fairfax County Parkway. At the same time they commenced an eight year cloverleaf construction project right in Springfield where two major highways intersect.

Nowadays, I have no idea how to get around Springfield. Things look familiar but I can’t figure out how to get to them amid one-way streets and overpasses. It is a sad, sad state of affairs. 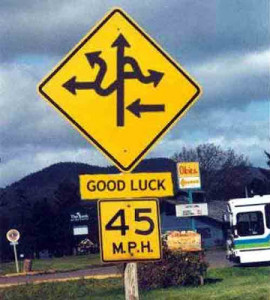 A couple of weeks ago I set out to a restaurant in Springfield. It was the most mutually convenient place for me and my friend. I headed over, confident that I knew how to get there with my eyes closed. I might have done better if I’d kept my eyes closed. A road that used to run two ways now only runs one way, and I came up on the wrong side. No problem, I figured, I’ll just go around the block and go back in the correct direction. Only…there seemed to be no clear way to do that. I kept ending up back on the other side, or too far down the right side, or with some major obstacle like a building between me and my destination.

I got frustrated and pounded my fist on the steering wheel. I scolded myself for being an idiot (so no need for any of you to do so). I blurted out strings of curse words that would make a sailor blush. All of this felt great but did not get me any closer to the restaurant. Yes, I have a fancy new GPS system in my car, but I didn’t want to take the time to pull over and try to find the address and figure out how to program the stupid thing. After all, I was busy inventing new curse words. 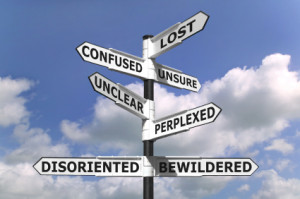 Finally, through trial and error, I made it in to the parking lot of the restaurant. The restaurant seats approximately a gazillion people and has a parking lot with about one tenth of a gazillion spaces. It was not pretty. Then I saw a sign that that there was additional parking across the street. I managed to get across the street without getting lost again; that might not mean much to you but for me it was a major accomplishment. Nope, that was full too. Back and forth, back and forth, until finally after about 15 minutes, a space opened up. No one tried to steal it from me or say they claimed it first. Victory was mine!

When I got out of the car I did kind of a “I finally got here and found a parking spot” jig. It was really not a good look, and neither were the looks I was getting from the throngs of people milling about. The hell with them! In a major battle in the War of Suburbia, this girl came out alive.

12 Responses to The Springfield Bypass? It Passed Me By