The Sky Is Falling!

I hope that everyone here in the DC area is snug and safe.  Judging by an afternoon with the StormDesk 2013 Panic Alert, the apocalypse is upon us.  Huge swaths of Montgomery County might be leveled.  It is possible that Anne Arundel County no longer exists.

How do we know what’s happening?  According to a meteorologist reporting breathlessly about the Weather Event, Doppler didn’t think a tornado was developing.  Apparently the meteorologist has stopped thinking altogether.  He’s sitting around waiting for Doppler radar to tell him what to do, but he keeps assuring us he is a meteorologist, not just a talking head.  When did Doppler start thinking?  Is that what happens when they put the radar in motion? 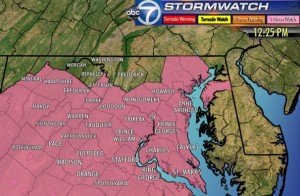 The StormDesk anchors couldn’t hide their disappointment when the storm didn’t deliver the wallop they had anticipated.  When it quickly blew by, they got desperate and started raising concerns about heavy rain on the highways.  They got really desperate and talked at length about what a storm like this usually does, even though this one didn’t. There’s a lot of scary stuff that totally could have happened.

Just to kill time and reinforce the import of the StormDesk, they had live phone interviews with Mayors, the President of some college I’ve never heard of and “trained citizen storm trackers.”  The Mayor of Laurel, MD said several people tweeted that they might have seen a tornado, so maybe there was one?  He sounded very hopeful.  I know I wouldn’t question a tweet.  I’m sure Twitter has fact-checkers and whatnot.  The StormDesk was forced to report on “rotational patterns”  and beg people to start trending #notaderecho on, you guessed it, Twitter.

Then they put a reporter on the ground to do (wo)man-on-the-street interviews.  Under perfectly clear skies, standing on sidewalks that had already dried up, the reporter stopped people and asked what they thought of the storm.  Most people scratched their heads and said “Huh?”  I’m just going to note that in the summer we get evening thunderstorms two or three times a week.  Unfortunately trees go down and some people lose power, but it’s not like Godzilla came stomping through toppling buildings and catching airplanes with his bare hand.

All I can say is that you heard it here first:  There may be other Weather Events.  Stay Tuned.

Like Loading...
This entry was posted in Uncategorized and tagged Culture, Social Media, Television. Bookmark the permalink.

4 Responses to The Sky Is Falling!