Did you catch the opening ceremony of the Olympics? A small child flying through the sky, ballet, astonishing acrobatics and weird dancing tea pots were just some of the things I noticed. 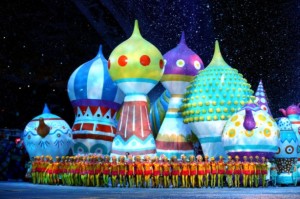 The Russians celebrated their literary heroes, such as Tolstoy and Pushkin, and sure, their work might have been banned while they were alive and for generations after, but hey, it’s all good now. Russia painted a pretty rosy picture of its history in that surreal opening; romanticizing the Russian Revolution, skipping over Stalin altogether, and re-imagining communism as a booming success. 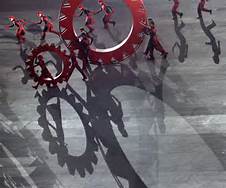 The productive gears of industrial communism!

Oh yeah, no dramatic re-enactments of all the athletes who in the past used The Games as a perfect time to defect.

If memory serves me correctly, I believe the 50s were Cold War years; Iron Curtain and all that. But according to the version painted in the opening ceremony, Russian teens were drinking malts and having sock hops, just like their American counterparts. Those kids with their crazy rock and roll antics! 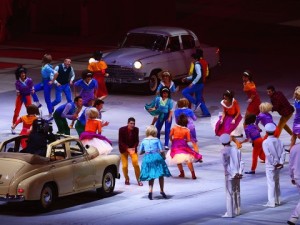 Kids pulling into the malt shop, rocking around the clockovitch

Of course, we had also envisioned having all five Olympic rings light up, but what’s a lost ring between friends? We meant to do that? 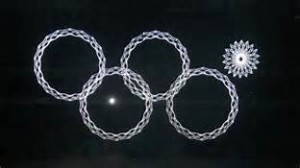 This seems like a good time to reminisce about my travels to Russia, which I blogged about here, here and here.

Ah, well, all bygones now. I have to admit I am a sucker for the Olympics and all its pageantry. And most of the sports are fun to watch. Sure, there are some things I find odd. What’s the deal with the biathlon that combines skiing and shooting? Who thought that up? And watching cross-country skiing for too long is a bit like watching grass grow.

But who doesn’t enjoy the astute and timely observations of the announcers? When Scott Hamilton gets that excited little kid voice and tells us to look out, here comes that triple/triple combination!!, I just want to give him a hug. But given all the controversy over Russia’s anti-gay stance, what I would really love is for Scott Hamilton to just bust loose and say “Check out that figure skater! He’s got a nice ass!” Would perk things up a bit, yes?

In listening to other announcers drone on, I feel like this is another occupation for which I am well qualified. I too could make astute observations like the ones I’ve heard:

What you are seeing here is a highly trained, intensely disciplined individual

As opposed to the athletes who are barely trained and lack discipline altogether? Call me crazy, but I’m guessing that every single athlete who makes it to the Olympics is both highly trained and intensely disciplined.

You know, winning a medal would just mean so much to her. She wants this badly.

No shit! Can you point out which athletes couldn’t care less about winning a medal?

His family is in the stands tonight, so proud of all that he is accomplished.

Again, which athlete has parents who aren’t proud?

Of course, that’s nothing compared to the Vaseline-over-the-lens human interest vignettes that NBC sprinkles in liberally. It’s like one long Hallmark commercial. You name the cliché; triumph over tragedy, comeback of the century, against all odds…can’t they come up with something more original? Wouldn’t it be refreshing to hear about an athlete who had no obstacles and has never overcome anything?

You know I adore my reality TV, and I’m thinking NBC should do something with that as well. How about a season of Real World that takes place inside the athlete housing? The story of seven strangers, international curling champions, picked to live inside a dorm. What happens when they stop being polite, and start being real? I can hear it now “Who in the hell stole my good ice brush? Confess now and I won’t say a word about the performance-enhancing drugs I saw in your suitcase. “ Even the good old days when we had stuff like the Tonya Harding/Nancy Kerrigan drama would be refreshing. Now there was some good classic drama.

Just some things to think about. I’m going to run now because I have recorded about 62 hours of Olympic coverage and I need to get right on it. With any luck there will at least be some interesting trash talk going on…

Like Loading...
This entry was posted in Uncategorized and tagged Celebrity, Culture, Imagination, Politics, Social, Television, Travel. Bookmark the permalink.