Sure They’re Cute At First…

When Dan and I bought our first home back in the dark ages, we were just like any other first time homeowners; broke.  We were also really excited about our townhouse, which we thought was just perfect, and it was for the first week or so.  But then we came home to a really nasty odor.  Our cat at the time, Cinnabar, was standing on the stove clawing the bottom of the hood.  And were those bird feathers scattered across the stove?

Dan did a little investigating and discovered that there was a nest of baby birds living in the stove’s exhaust vent.  The exhaust was missing the little screen that keeps critters out.  Judging by the aroma wafting through our house they had seriously settled in to their new home in our new home.  Actually in all fairness, they may have been there before we were. 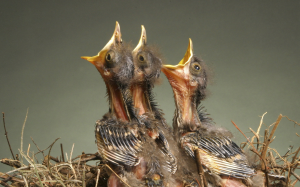 We didn’t want to hurt the birds, but at the same time we needed to get them out of the vent.  After Dan’s efforts failed, we decided that maybe an exterminator could get them out safely rather than killing them.  So I opened up the yellow pages (remember those?) and started calling.  The first place I called was some kind of extermination boutique; they only did rodents or something.  I don’t think they totally appreciated my reminder that rodents are mammals, just like us. I called the next company, and they only did bugs and termites.  Who knew that exterminators had specialties?

The next listing said “we kill everything” bugs, termites, rodents, weasels, raccoons and pesk-y relatives!”  I called the company and explained the problem and the guy on the phone was indeed willing to kill everything and anything, expect a little nest of baby birds.  I told him we didn’t want to kill them, we just needed him to get them out of there but I had clearly touched a nerve.  He told me in all his years of killing other animals he’d never seen such callous disregard of a living creature.  Huh.  So just to test him I asked if he could help me out with the neighbor’s bratty kid.  He said he knew a guy who knew a guy.

OK, moving right along, the next exterminator, same thing–completely disgusted that I wanted to harm baby birds.  I told him the point was we didn’t want to hurt them.  No way.  So I told him about the baby bunnies running around our yard and he said he could take out the bunnies no problem.  I passed on that offer.

On a side note, we did have bunnies all over the neighborhood, and the HOA newsletter described an ugly solution for the “bunny infestation.” Fortunately most of our neighbors were horrified and everybody left the damn bunnies alone.

Then I called the humane society.  They said to just leave the birds alone.  The thing is, they weren’t living in a stinky house with a cat practically tearing her claws out to get to the birds.  When I pointed that out they helpfully advised that I not let the cat get near the birds. 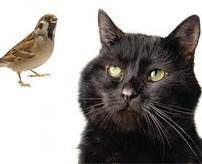 After many more calls, we finally found an exterminator who said he could get them out unharmed.   He stood in my house and looked me straight in the eye and I asked him to please tell me the birds had survived.  He told me the birds were really happy on a farm in upstate New York, playing with all the other birds.  It must be quite a place, because that’s exactly where my childhood dog had gone. 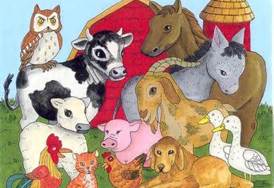 4 Responses to Sure They’re Cute At First…