Sock It To Me Baby

I’m not sure when it happened, but at some point over the last couple years, colorful patterned men’s socks officially became A Thing. It feels like suddenly they were everywhere. We’re not talking basic argyles; we’re talking polka dots, stripes, paisley, whimsical. The whole gamut. In fact, men’s socks are so much of A Thing that they now have sock vending machines. Seriously. I’m just not following the thought process. I need socks, let me go look for a vending machine? Or socks are now an impulse purchase? I guess this started with the ancient Greek philosophers, who first proclaimed that life is too short for boring gladiator sandals. 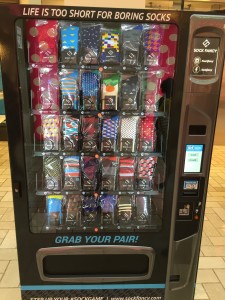 A hosiery vending machine would have been an awesome idea back when women had to wear pantyhose every single damn day. Because back then, everything was precarious; every desk corner, finger nail, piece of jewelry was a possible weapon in the war on pantyhose. If I ever managed to get through an entire day without a run in my hose, I inevitably damaged them when I was ripping them off the minute I walked through the door each night. And if I managed to preserve a pair through all that, and through a washing, they would absolutely tear the next time I was putting them on. Because it is a well known cosmic rule that pantyhose can only be worn once. And the more expensive they are, the less likely you are to even get one full wear out of them.

That’s why I came up with my own rule. If my pantyhose ran before lunch, well, I pulled on a new pair from my stash in my desk. If it was after lunch, no. Just no. Going with no hose was unthinkable back then (unthinkable!) so I would walk around pretending I had just then ripped them. Oh no! Will you look at that? Mostly I would try to stay behind my desk. But short of having some important meeting or after hours event, if those hose ripped after lunch, that was that.

So yes, we could have used a vending machine but of course women aren’t as simple as men. In any regard. In this instance, pantyhose come in 22 different shades, 15 different sizes and 30 different styles, and if you do the math on that, well, it would have to be a gargantuan machine.

Men aren’t capable of calculating all those variables so the world has been streamlined for them. What size are those socks? The size that fits all men. What color are those socks? Blackish, brownish, go-with-anythingish. In other words, colorful patterned socks, so men can’t go wrong. They just carefully insert their credit card, push a button and bam! Socks to go. Without ever setting socked foot in an actual store. This is a big win for men. And really, a big win for women. We might be able to finally trust them to buy their own damn socks. So that’s something to be grateful for today. Also not having to wear pantyhose every day. That’s something worth celebrating. And for that, I know just where to get the supplies. There’s a candy machine right next to the socks. And right next to that is diet soda.

So diet soda and chocolate on the sidelines while men pat themselves on the back for buying a pair of socks. Who’s in?

Like Loading...
This entry was posted in Uncategorized and tagged Career, Culture, Fashion, Imagination, Technology. Bookmark the permalink.

8 Responses to Sock It To Me Baby