Circus Cooking With Dan The Man.  That’s the name of the new show I’m going to pitch to the Food Network.  Or maybe Animal Planet.  As I noted recently, Dan can cook anything while under adult supervision.  Last weekend, as he was whipping something up, I once again noted that our kitchen is a three-ring circus.

The blasted cats.  Helen of course sleeps through anything, but if you so much as think of fixing food Jack, Janet and Chrissy jump on to the counter and lie in wait.  Three cats are a lot to contend with when you only have two elbows.  So when we prepare food we have to huddle over the bowl or cutting board with both elbows pointed out.

And good luck if you need something from the refrigerator or pantry.  The refrigerator is a stretch but with the right angle you can guard the counter with one arm while grabbing something with the other.  But the pantry is a precarious 3 steps away which usually calls for double teaming if possible.  If not I always try saying “No kitty!” in a stern voice while they stare at me unfazed and go for whatever food I left unattended. 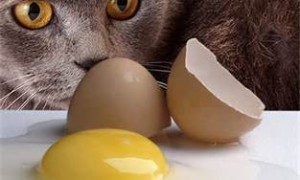 Sometimes we get desperate enough to hiss.  The cats laugh in the face of our hissing.  Why is it that they can have a hissy fit and we can’t?

But if you’re Dan, you also have to contend with yours truly yakking nonstop in the background.  Admittedly I am a royal pain in the arse, but sometimes it’s because Dan leaves me no choice.  Last week, for example, as he was putting something in the oven I noticed the rack was on the bottom rung.  I asked him if he didn’t think it should be in the middle of the oven and he looked at me like I had two heads.  “Uh, it was like this when I found it.”  I explained that sometimes I move the racks around so we can cook two things at once, or for certain dishes, but as a routine matter the rack should be in the middle.  “Oh.”

So just picture the show.  Cats face first into whatever Dan is cooking.  Me blabbing on and on in the background about middle racks.  And Dan, rolling his eyes, hovering over a bowl and hissing. 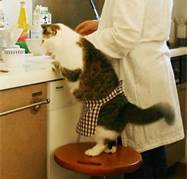 You would watch it and you know it.  Please back us up when we pitch the concept to Bravo.

Like Loading...
This entry was posted in Uncategorized and tagged Animals, Business, Celebrity, Culture, Diet, Humor, Television. Bookmark the permalink.