Have I mentioned before that I hate shopping? Don’t get me wrong, I like to acquire things, particularly adorable shoes that I totally don’t need, but I do that over the internet. Online shopping is the best thing that ever happened to me! I know I’ve mentioned how much I dislike the outdoors. Nonetheless, on rare occasions I allow myself to be persuaded to either shop, go outdoors, or both. Last weekend Dan and I decided to walk around National Harbor, a relatively new addition to the DC metro area, on the banks of the Potomac.

Oh, the things we saw! So much blog fodder, so little time. I could no doubt get lots of mileage out of the number of inappropriately dressed people whose images are permanently burned into my brain. I think, for example, that halter tops should come with a legal requirement: I, the Purchaser, testify that I am 29 years old or younger. I further testify that I do not have rolls of fat that will be exposed by wearing a halter top. Don’t get me wrong, I’m not trying to pick on anyone. As I have frequently mentioned I myself am, you know, big boned. However (!), you wouldn’t see me running around in a halter top. First of all because I don’t run. Second, I definitely don’t wear halter tops. But I’m way too polite to opine on others’ appearance.

But there was so much more! Did you know that there is a store that sells nothing but cups? Seriously, that’s their entire inventory. Insulated cups. When we poked our heads in I was sort of incredulous and asked the overly-perky (in my opinion) sales clerk if they really only sold cups, she said “Yes. But not just any cups. Indestructible cups! Cups that keep hot beverages hot, and cold beverages cold.” 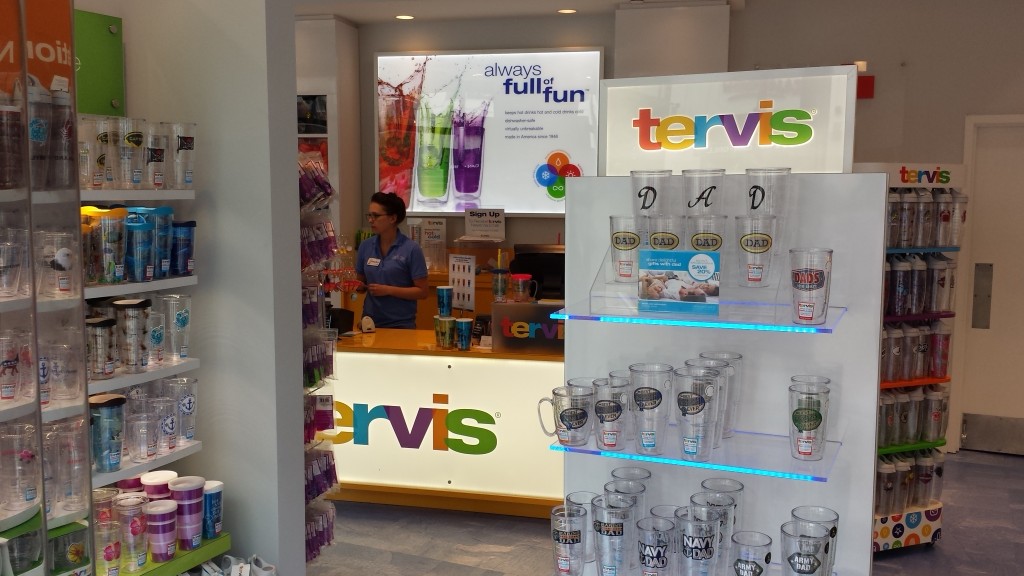 At that point I was compelled to ask what would happen if I took the supposedly indestructible cup and ran it over with my car. Theoretically, if that destroyed the cup, would I be entitled to a refund? I wouldn’t say that I was thrown out of the store, but, after my question it became rather tense. I took that opportunity to make Dan snap a photo while I dashed.

And just a few doors down, Build-A-Bear! I love that place and when my niece and nephews were little I had an excuse to go in there. But now, it’s an absolute racket. It’s not just about building a simple teddy bear any more. You can build bears, sure, but you can also build My Little Pony and Hello Kitty and unicorns and bunny rabbits and jackalopes. 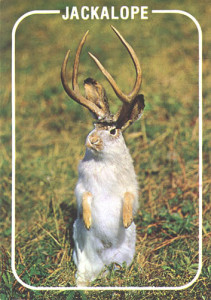 But in case that leaves any excess money in your pocket, you can also buy any number of outfits and accessories for your new friend. This includes shoes and even roller skates. 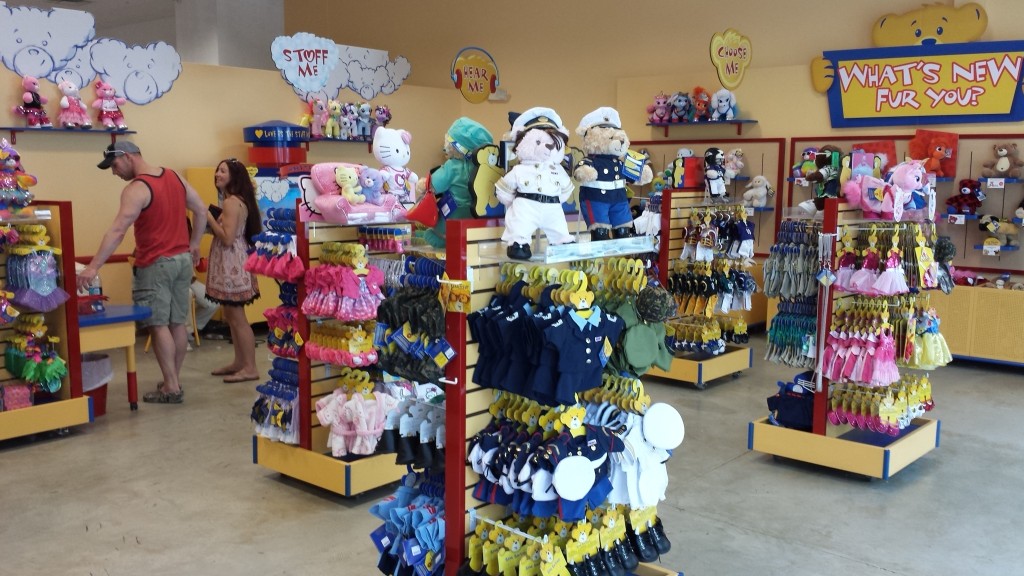 Not to be self-righteous, but all this while children around the world go to bed hungry and even worse, there are cute shoes in my size sitting around in a warehouse somewhere gathering dust because I’m not spending money on them. Such a waste.

Having met our needs for impervious cups and overdressed stuffed animals we were ready for a snack. Thank goodness, the Peeps Store was right across the way. Yep, they sell Peeps. Lots of them judging by the line at the cash register. I honestly thought Peeps were for decoration and/or to build funny dioramas to win the Washington Post annual contest, but people actually eat them! 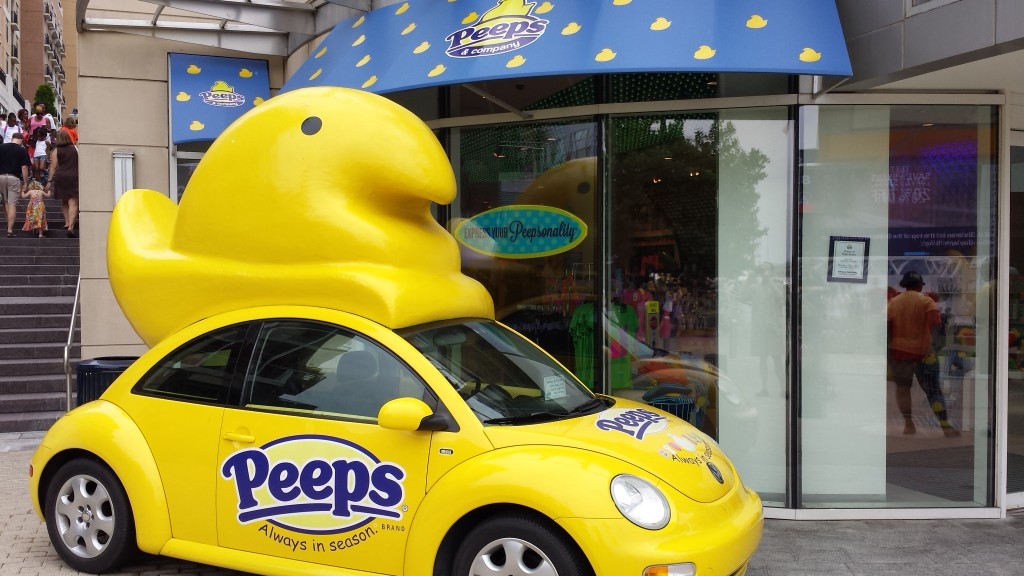 I figured I could just go home and eat a pillow soaked in corn syrup instead, but it was clear that my stuffed jackalope-on-skates needed just one more accessory; a little basket of miniature Peeps.

Now, for a little entertainment. We went to check out the Capital Wheel, the latest addition to National Harbor. I was expecting something like the London Eye but was sorely disappointed. This wheel is much smaller and less impressive. 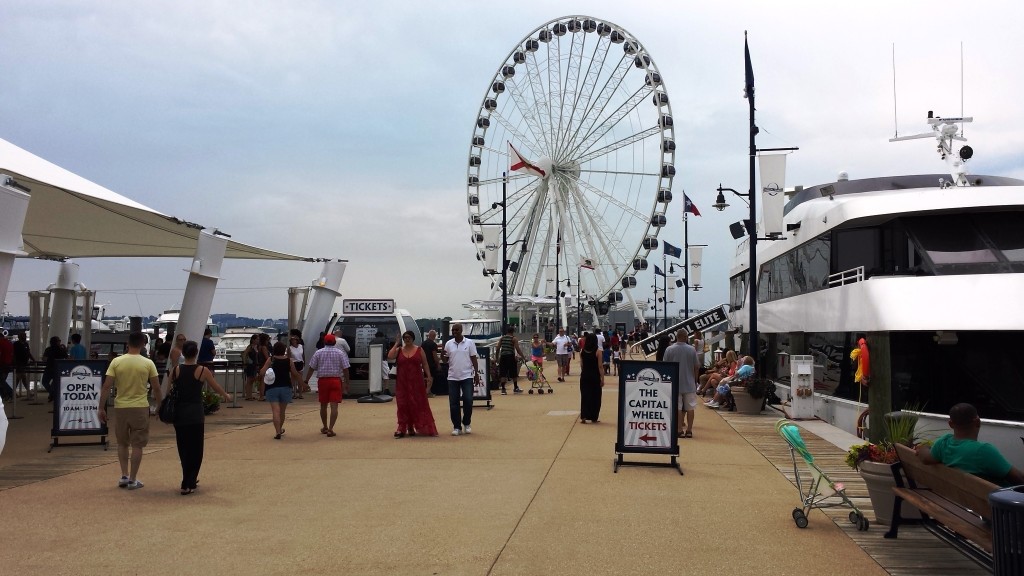 I can’t really tell you about the ride because they were asking $15 each for me, Dan, and the jackalope, and we can’t just blow $45 on something that frivolous.

The bottom line is National Harbor is a wholesome child-friendly kind of a place that’s perfect for the whole family. That’s why they’re getting ready to put in a huge casino. And also, there’s this, which frankly some of the children seemed to have questions about. I have no answers, except to say that he would not look good in a halter top. 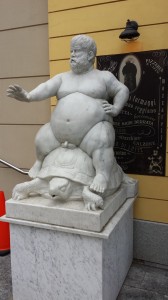 Like Loading...
This entry was posted in Uncategorized and tagged Animals, Culture, Fashion, Imagination, Travel. Bookmark the permalink.

35 Responses to Sights And Sounds: WTF?