Not Appearing On The Small Screen: The Jetsons

I went to Olive Garden recently. I know, I know, I probably shouldn’t admit that but I did. I had an insurmountable breadstick craving. Don’t judge; people in glass chain restaurants shouldn’t throw stones.

Being an astute observer, I noticed right away that they have those new little tablets at every table. You know, you can use it to order your food, summon your server, pay your check, keep your kid/spouse occupied with games, and of course, shop. It has a built-in camera and wi-fi connection to social media, so that none of your family or friends miss even a single moment of the excitement that is your life, as seen through an Olive Garden lens.

Yes, more screen time. On the off chance that you and your dinner companions might actually engage in real human interaction, instead of just staring at your phone and posting pics of the person sitting across the table from you; we have now created another distraction. Oh goody. Because if there’s one thing we don’t do, it’s spend enough time staring at a little screen.

When I go to a restaurant (or, you know, Olive Garden) one of the perks is that I get served. By a server. A human server who writes down my order so I don’t have to, and hopefully notices when my water glass is empty and refills it without being asked. A human server might answer the question “I can’t decide between the fish and the pasta, which do you recommend?” That kind of thing. A tablet doesn’t do that.

Most importantly, jobs. Servers are (typically) actual humans, with actual bills to pay, and as noted above, actual non-artificial intelligence (in most cases) that add value to the transaction. I love a story that my sister-in-law Lisa tells about her dad. When self-serve gas stations were taking over, her dad went out of his way to go to full service and pay the premium, despite the fact that he was strapped for cash himself. He did it in the hopes of saving attendants’ jobs. I thought of him when I told the hostess I preferred a human server. I turned the screen around backwards so it wouldn’t beckon me, but kept an eye on it because they can be sneaky.

For my generation, this was supposed to be the post-space-age; The Jetsons Age. What would be much more helpful than a smart screen at a restaurant? Oh, I don’t know, flying cars that fold up into briefcases?  What we ended up with are little screens that own us 24/7. I thought by now my life would look like this: 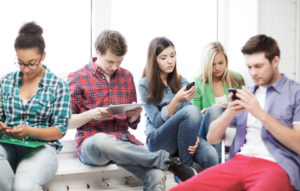 And now we’ve put yet another device into play. With a tablet on the table and smart phone in hand, we can multi-task even more, as we’ve all been taught to do, judging by the number of drivers who text, yell at their kid, put on their make-up, and sip their latte while allegedly operating their vehicle. [That is a side rant that I think I already covered in another post, although it does bear repeating.]

According to a number of super reliable interweb sources, the tablets are solid revenue producers for restaurants. In general, people order more when it is just a fingertip away. People order dessert more when they’ve seen a picture of it flash by, and don’t have to make eye contact with the server when they order the triple double triple deadly chocolate thing.

More revenue is good, and I get it from the business angle; sometimes I even prefer the convenience of it. But for the fact that we are losing human contact all around. And don’t get me wrong; I don’t particularly care for most people. I think animals are far superior. Still, we are social beings and need to draw the line somewhere, right?

Alas our future didn’t end up looking quite the way it did on The Jetsons. I could use that flying car right about now. But barring that, can I at least have a no-maintenance robot dog? One that would bring me unlimited breadsticks and salad, and really mediocre meals? We miss you Astro. I mean, we riss rou Rastro.

Like Loading...
This entry was posted in Uncategorized and tagged Business, Childhood, Culture, Diet, Humor, Technology, Television. Bookmark the permalink.

16 Responses to Not Appearing On The Small Screen: The Jetsons