Well I’ll be damned. I’ve been so busy promoting my book, I neglected to score endorsement deals for my cats. The so-called “Grumpy Cat” (aren’t they all?) on the other hand, is set for catnip and chow for life. 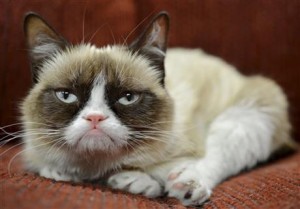 I don’t know what it is about social media that allowed felines to move to the top of the food chain, but there they sit. I don’t object—obviously I’m a cat lover, I guess I’m just kind of jealous. According to this article, Grumpy Cat’s Facebook page has 1.3 million likes and she has 111,000 Twitter followers.

But that’s not all. Nope, the article goes on to say “…the 1 ½ year old mixed-breed feline has a merchandise line and reportedly has a movie deal in the works.” Really? And I couldn’t get a part in my frackin’ high school play? My only hope to sponge off of Grumpy Cat at this point is to ghost write the NY Times bestseller you just know is coming.

I’m not going to elaborate on my feelings about cats and hot mess reality stars named Snooki who “write books” that end up on the NY Times bestseller list, because it would make me sound bitter, which I am. Likewise I’m not going to mention that Grumpy Cat’s owner is ironically named Tabatha, which is like one of the top five cat names ever. Tabatha is laughing all the way to the bank.

But Tabs, and I hope you don’t mind if I call you that, here’s some unsolicited but important advice: First, if you haven’t already, insure the cat for a gazillion dollars with Lloyd’s of London. Second, go online right now and find a Grumpy Cat lookalike at some pound, somewhere. Because if I had a cat that coughed up golden hairballs, so to speak, I would make sure I had an understudy waiting in the wings. With a name like Tabatha, you should remember how well it worked when Darrin #2 casually showed up on Bewitched.

Here’s the bottom line. We are keeping four (4) cats in Friskies and cat litter right now, not to mention endless packages of fuzzy mice. So at least one of them better start getting movies and endorsement deals, or they might be moving in with Aunt Snooki.