Dan and I were married on October 9, 1988.  Hard to believe it’s been 24 years since we said I do.  Of course technically I’m not sure either of us said that—the Rabbi read all of our vows in Hebrew and then coached us on our answers so we could have promised each other anything standing under that ostrich feather chuppah.  I guess it doesn’t really matter at this point because things seem to be working out for us. 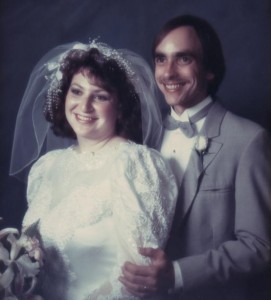 Dan woke me up this morning by sweetly whispering in my ear that I needed to get up early, because Roxana was coming!  I agree with him that this piece of news was much more urgent than Happy Anniversary.  Roxana is the sweet and lovely cleaning woman who comes to our house every other week and performs miracles.  We adore her but there is one little downside…she likes to put things away.  To be more specific, she likes to put things away in completely unexpected places.  On one occasion we found a missing frying pan in our china cabinet (hint-this is not where we usually keep our pans), my contact lens case might migrate from my bathroom sink to the dresser in the guest room, and here and there she might have put something away so well we don’t ever find it.  So every other Tuesday, we batten down the hatches.

After we ran around putting stuff away we actually stopped and wished each other a happy anniversary.  Dan lamented that he’d forgotten to pull out the card.  Yes, the card.  We hate wasting trees and we’re not that big on cards so we have a single card for each celebration-anniversary, birthday, valentine’s day, etc. and just whip it out as needed.  It’s the thought that counts, right?

We’ve at least enjoyed a romantic evening.  I worked until 9 and when I got home I enjoyed a bowl cereal for dinner (but with really, really fresh almond milk for the occasion) and Dan is settling down to read for a bit while I watch trashy TV.  After that we’ll reminisce, go through those old wedding photos, talk about old times.  Or maybe not.  To be honest, it’s become somewhat painful to flip through the wedding photos because we were 24 years younger and things are looking a little different nowadays.  I take solace in the fact that at least a few of the people who were in our wedding read this blog, and are right now thinking “Can it have been 24 years?  Not possible!” because they look the same and only Dan and I have aged.  Wrong!  You just haven’t seen the pictures in a while. 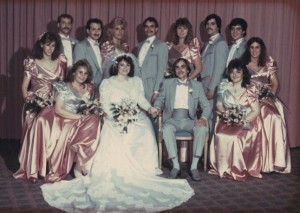 I need to take a break from funny for a moment to say how much I miss my cousin Andrea, who was taken from us way too soon.  She is the beautiful woman sitting to Dan’s left and I can’t tell you how much I adored her.  She will always have a special place in my heart.  And in perspective, I’m so grateful all the rest of us have had a chance to age.  OK, back to funny as Andrea would want.

As you can see in the picture, I must sincerely apologize to my bridesmaids for the pink (we called it mauve back then) and silver taffeta and lamé dresses that you see above.  So much time has passed, can’t we all go with the fiction that they were the height of fashion at the time?  And I know that at least my friend Lesley got a second wear out of it…when she covered it in fake blood and dressed up as Carrie for Halloween.  She looked fabulous in that dress, no matter how resentful she may have been at the time.  My OGH Michael was a groomsman, but he would have killed for that sparkly dress.  Just sayin’

And after all these years, I will once again apologize to my brothers (for the umpteenth time) and our other wedding guests for having the audacity to get married on a day the Redskins were playing the Cowboys.  There’s been a lot of drama and pain around that, and we’ve all said things in anger we didn’t mean.  It’s time to let it go.  I’ll also extend an olive branch and forgive my entire family for pulling Dan aside on our special day and asking if he really, seriously wanted to marry me.  I believe my brother Barry actually offered him a getaway car.  Warm fuzzy, right?  I pledge tonight to give up my anger and bitterness towards Dan’s brother for getting the ring stuck on his finger for an uncomfortable amount of time.  As of now I will choose something else to be angry and bitter about.  Can we finally let the healing begin and be a real family again?

So much more to say, but writing is interfering with my trash TV time.  Happy Anniversary to us!

Like Loading...
This entry was posted in Uncategorized and tagged Family, Humor, Marriage, Social, Television. Bookmark the permalink.

6 Responses to Here’s To Us!