Have A Laugh On Me. Please.

You know what’s funny?  No?  Neither does Dan.  He is by far my toughest audience.  He tends to sit quietly while I laugh at my own jokes.  How pathetic does that make me?

My millions (upon millions) of adoring fans find me very funny, and quick with the one-liners.  But Dan?  Nothing.  So I prompt him, “Did you hear me?  I just said something funny, ”  to which he says “Oh.”

Recently I was watching nonsense on TV as usual and a show came on called World’s Best Log Cabins or something.  I was of course immediately spellbound.  I said “Well it’s about time someone made a show about log cabins. I knew something was missing in my life.” And Dan said “    ”  Later in the show we learned that a fully complete log cabin could be fabricated and then shipped out across the country.  I made a ding-dong doorbell noise and said “honey, our house is here!”  Nope, nothing.  My world famous Mike Tyson impression?  Nothing.

I get a little desperate sometimes. Recently I grabbed Jack‘s paws and made it look as if he was driving a car and sang the Toonces, The Driving Cat theme song.  I was cracking myself up, Jack was outraged and Dan gave us an almost half-smile. 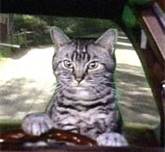 I went so far as to do the catwalk in a hospital gown with high heels, lots of jewelry and a genuine supermodel look that said “I’m grumpy because I haven’t eaten anything but lettuce since 1996,” right before surgery, mind you.  Seriously, I brought props to the hospital. The nurses thought it was hysterical right before they told me to cool it.  Dan smiled.  Not like a huge smile, but it was something. 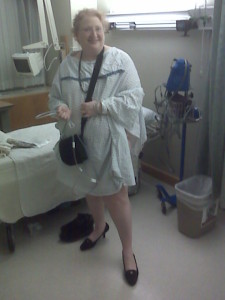 And it’s not like Dan doesn’t have a great sense of humor.  He laughs at other stuff, and is actually very witty.  He doesn’t talk a lot, but when he does it’s not unusual for him to slip in something hilarious.  And I always, always laugh when he says something funny.  I never leave him just standing there waiting for a laugh.  Just sayin’.

Like Loading...
This entry was posted in Uncategorized and tagged Culture, Family, Fashion, Humor, Marriage, Television. Bookmark the permalink.

2 Responses to Have A Laugh On Me. Please.