Nostalgia reigns supreme on Facebook. We all want to remember the younger, thinner, healthier versions of ourselves, and reimagine that our world then was perfect. I admit I do my fair share of indulging too.

Recently I was added to a new FB group set up for people who graduated from my high school 25-40+ years ago. I graduated in 1982, so fall solidly in the middle at 34 years. People have posted a lot of fun pics and memories, and what I find most interesting is how much freakin’ stuff people a)remember and b)have hoarded away all these years.

Graduation tassel? Yeah, like everyone else I used to hang it on my rear view mirror 100 years ago, but where is it now? Long, long gone. As are those from college and grad school. Because at some point or another I was cleaning out a drawer or closet and pulled out those tassels and thought, “what the f*ck am I ever going to do with these?” Other people apparently never had that thought, or if they did they ignored it, because they are posting pictures of their tassels, old school newspapers and clippings about various high school sports teams, etc. One person posted a picture of our high school guidebook. I don’t think I ever knew there was a guidebook that listed all the rules, office hours, what was going in my permanent record…I mean, seriously, there was a guidebook? And even more incredibly, someone held on to it for 40 years? 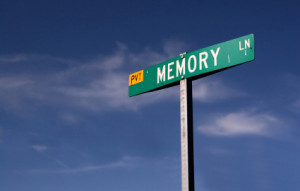 People started posting about their favorite teachers, classes, who they sat next to in 10th grade English. How do people remember this stuff? I tried, really hard, to remember going to class, what class it was, and who taught it. Any class, in any of my four years. A few vague memories because I loved the subject (English, History, Spanish) but mostly drawing a blank. Now, those of you who knew me in high school might have some kind of smart ass remark about how much school we skipped. And it is entirely possible that I spent more time eating fries and drinking shakes at McDonald’s and hanging out with friends in someone’s basement (oh, we all had basements, that’s for sure) than I did in school, but I barely even remember that stuff. I do remember flunking 10th grade PE, but, you’ll have to admit that’s pretty memorable, especially since I had to go to summer school to make it up.

Then there is talk of pep rallies. I feel very confident in saying that in four years of high school I never, ever attended a pep rally. That may be when I was at “McDonald’s” having a “shake.” Well, that was my story anyway. People talk about whatever big, exciting football game they remember. Clearly my experience was lacking, because what I remember of football games is being under the bleachers, not on them. Let’s just say school spirit was not my strong point.

People also began posting split screen pictures; their senior picture side-by-side with a super flattering, perfectly (dimly) lit, allegedly current picture. There are pictures of groups of giggling teenagers dressed in plaid shirts and cut-offs for the annual Sadie Hawkins dance. I have a vague memory of going to Sadie Hawkins one year, but if there is a picture from that uneventful evening, I sure as hell don’t have it.

One woman posted pictures of herself wearing two different cheerleading uniforms, in a cheerleading pose (I hope that’s what she was doing), but the pictures were just recently taken, like, yesterday. She noted that she simply couldn’t find any old pics so had no choice but to pull out the old uniforms and take new pics. OK, fine, I’m impressed that anything from high school still fits this woman; I probably couldn’t get my big toe into something I wore in high school. But the thing is, are we expected to believe that over the past 40 years she didn’t keep any photos, but did keep at least two of her cheerleading uniforms? Is that what she’s trying to sell? Because I call BS on that. It would be better if she just said “I could have posted an old picture, but hey, check me out, I still fit in my high school cheerleading uniform!” I can respect that.

Will Ferrell and Cheri O’Teri on SNL. Yes, my school team was Spartans and yes, our colors were orange and blue. Go figure.

I finally gave in and pulled out my old yearbooks, the only thing I still have from high school, to see if I could jog my memory. The people I recognize are people with whom I am still friends to this day. A number of other people are familiar simply because we went through high school, junior high, and in some cases even elementary school together. Or because one of my brothers was friends with one of their siblings. Or because they lived in my neighborhood and rode the same bus as me. Stuff like that. Keep in mind I went to a huge high school, graduating class of about 600, so even if 100 of them ring a bell somewhere, I don’t know the majority of them. I definitely can’t remember who I sat next to in 10th grade biology and/or who taught said biology class.

Looking through the yearbook was fun though, because it reminded me of several things. First, I’m really glad to be an adult. I had a fine high school experience, but if given the chance I wouldn’t hop in a time machine and go back again. Second, fashion. I remember all my Calvin Klein jeans, Mia clogs, Frye boots, wool skirts, platform shoes, painter’s pants, rainbow t-shirts, GASS shoes and last but not least, Gunne Sax dresses. Cause, you had to have at least one Gunne Sax dress. You just had to or else you would absolutely die! I may not remember many of my classmates, or nearly any of my teachers, but I guarantee you I remember every outfit and every pair of shoes I ever owned. Ever. In fact, going all the way back to childhood I not only remember my own clothes, I remember my Barbie’s clothes. Malibu Skipper’s too. Third, we were living in the dark ages. There are pictures of pay phones and mimeograph machines, and a full lunch cost 85 cents, which according to the 1982 yearbook was an outrageous increase over the prior year. And PAC-MAN was the new cool thing that was also apparently destroying life as we knew it. 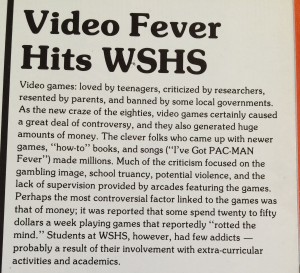 Banned by some local governments? Seriously? I think someone made that up.

For the stuff I don’t remember, the yearbook put everything in context. It was an exciting time in the country and in the world. 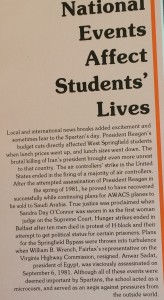 Imagine that I was a senior in high school before a woman sat on the Supreme Court.

We didn’t know that in the blink of an eye we would have technology beyond our wildest imagination and that we would ever, ever be older than our parents were at that very moment. We sure as hell didn’t anticipate Facebook. Except maybe that one chick, who held on to her uniforms and managed to stay skinny enough to still fit in them. Maybe she knew.