I know that everyone else in the northern hemisphere is happily welcoming spring, but not me. I like winter. I like the cold, and the snow, and the short days…I know, I know…I’m weird. One of the harbingers of spring in our house is the marching of the ants. They come every year. Little tiny black ants, in great number. Given our kitties and Captain Environ-Mental’s concern for the environment, we do not use chemicals to strike back. In fact we don’t use anything inside the house at all; The Captain has some kind of organic crap that he sprays outside all along the perimeter of the house, and it works…eventually.

Until that stuff kicks in, I have to share my living space with hordes of ants. They used to come to the kitchen, despite the fact that we’re careful about crumbs; I mean there are two big bowls of dry cat food out at all times and ants seem to have an affinity for cat chow. But for some reason the ants now turn up in my bathroom, upstairs. They seem to be traveling along the plumbing lines, but I don’t like to think about all that. All I know is that when I go into my bathroom there are little ants in and around the sink. I do what any sane, incredibly cruel person would do and wash them down the drain.

I have what I think is a very fair rule: I don’t go outside into insects’ territory, and I ask that they do not come inside to my space. The problem is that I feel really badly about killing all these guys. I know they’re just ants and everything, but I get caught up in my wild imagination. I mean, what if the ant’s family is sitting at home (presumably somewhere in my plumbing) watching it get later and later and worrying that their loved one isn’t home?

Then sooner or later I start thinking about Revenge of the Ants. One day a giant ant is going to come lumbering up the hallway seeking revenge. “You have killed my people, er, uh, species…and now I’ve come for you!” And then I’m the one washed down some giant drain, or worse. Look, just because as far as we know it’s never happened before doesn’t mean that it might not happen one day. 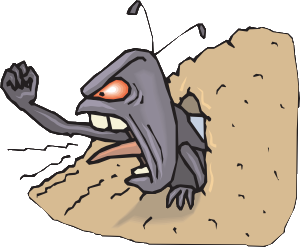 You might be thinking, what about all those cats? Why aren’t they dealing with the ant situation? The answer is that they are lazy, worthless, or both. They will sit right there on the counter and look at the damn things in the sink; sometimes they give a little half-hearted swat of the paw but mostly they yawn and go back to bed. My bed. While I’m in the bathroom killing ants and wondering about cosmic retribution. 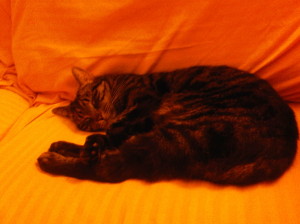 Dreaming of catching bugs, but not actually catching any 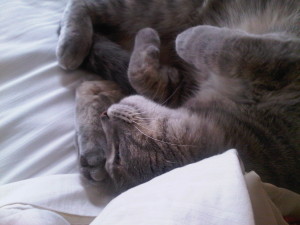 Of course, if there is an imaginary bug, that’s different. In the Cat Dimension any flicker of a shadow turns into a bug, always at the very top of a wall or on the ceiling, meaning they will literally try to climb the walls to get to a microscopic bug that isn’t even there. 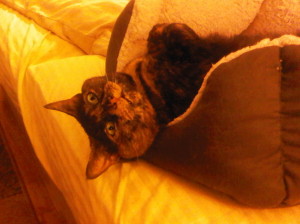 Is that a spot on the ceiling? Do I need to chase it?

The bottom line is that I am dealing with extraordinarily lazy cats, industrious ants, and an overactive imagination. It is a bad combination.

Like Loading...
This entry was posted in Uncategorized and tagged Animals, Family, Humor, Imagination. Bookmark the permalink.

18 Responses to Feeling Antsy About Spring