When I was a kid, I was scared of just about everything.  When I was at that party a couple of weeks ago someone started talking about the old days in Atlantic City.  When AC was still a nice beach resort my family used to go there every summer too.  I was really little and don’t remember a lot, but some things are etched in my memory.  Someone was reminiscing about Steel Pier and I said I was terrified of the diving horses; others agreed.

I have no idea why but I was also terrified of Mr. Peanut, and it turns out that someone else found him scary too!

I was walking through the airport several years ago and out of nowhere Mr. Peanut appears, top hat, monocle and all.  I went running over and gave him a hug and told him I was never really afraid of him, I just didn’t understand his greatness.

Mr. Peanut reached into his shell, whipped out a cell phone and started to call security, but I backed off and explained how scared I was when he used to roam the boardwalk in AC.  I told him my mom would never believe what a brave girl I’ve become, so he agreed to take a picture with me so I could prove it.  I had the picture blown up and put it in a nice frame so my mom could display it proudly.

At some point I started worrying about a burglar coming into my room.  My dad sincerely explained that burglars are really stupid, and would never be able to figure out how to get in my room.  I believed him. I was scared of dogs until I had one of my own; then I loved my dog but was still scared of other dogs.

When my parents took us all to the circus, I was scared of just about everything.  But I started obsessing over the new shoes I’d left at home, convinced someone was going to steal them.  I took my shoes pretty seriously even way back then.  I got so worked up that we had to actually leave the circus so I could get home and check on my shoes.  Miracle of miracles, they were still there!  I put them on immediately and I’m pretty sure I kept them on even when I climbed into bed. 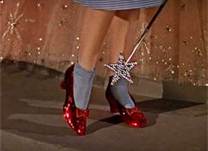 I probably shouldn’t admit this but at one point I became terrified of tidal waves, after I begged and pleaded with my brothers to take me to the movies with them, and we saw The Poseidon Adventure.  They got a little frustrated explaining to me that Northern Virginia was not exactly a coastal town, but I never let details like lack of an ocean stand in the way of my irrational fears.

Like Loading...
This entry was posted in Uncategorized and tagged Childhood, Family, Humor, Imagination, Self, Travel. Bookmark the permalink.

2 Responses to Fear Not