Believe it or not, Dan loves it when he is the subject of my blogs, and was tickled that I fleshed out the whole Romans catching lions thing. When I asked him what I should blog about next he suggested I discuss his Coffee Assembly Line, because suddenly my blog is all about him. I told him, I can’t get a whole blog out of that! Sure, it’s funny and eccentric, but, my readers expect top notch intellectual discourse, not coffee talk!

Then I remembered that it’s just my blog; I’m not exactly going for literary excellence. So here goes: Dan has a Problem with coffee. He loves it. We have no fewer than half a dozen different kinds of coffee at any point in time. But it’s not enough for him to just make some coffee—he has to Danify it and make it as complicated as possible.

First, the coffee ice cubes. When he drinks iced coffee he doesn’t want to dilute it so he fills ice cube trays with coffee and plants them all over the freezer. Then, the parade of condiments. In general Dan takes his coffee black, but for his homemade coffee confections he busts out chocolate syrup and condensed milk and cinnamon and I don’t know what else.

There are of course other accoutrements. Biscotti of various kinds. Different cups for different types of drinks. Dan has his own little coffee bar set up. He’s a regular frackin’ barrista. 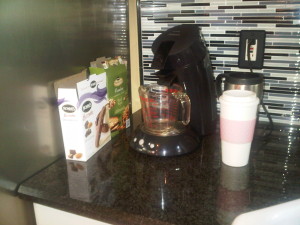 So Dan drinks a lot of coffee, but understand that by nature he moves as if he’s underwater; infuriatingly slow and deliberate. That’s why one of his nicknames is Super Slo-Mo. And no matter how much coffee he drinks, he still moves at a snail’s pace. It can take up to 15 minutes for Dan to get his coffee situated in the morning.

I bet you’re wondering if I have a point in all this. Well I do. First, I love a blog where I can work in the word “accoutrements.” In my head I pronounce it all French and snooty. Second, what I’m saying is that the mysteries are adding up. Dan shops for food several times a week yet we don’t have anything in the house to eat. Dan drinks gallons of coffee but never picks up the pace. Dan watches sci-fi but never learns anything scientific.

So my point is this: if Dan talks and I’m not there to make fun of him, does he still make a sound?

Like Loading...
This entry was posted in Uncategorized and tagged Blogging, Diet, Family, Marriage. Bookmark the permalink.