Color Inside The Lines

We already know (well, I’ve told you before, so if you were listening you already know) that stupidity is enhanced by alcohol. One of the more idiotic things some people do when drunk is get a tattoo. It seemed like a good idea at the time. Really? So you met a girl at a strip club one night and thought it would be awesome to have her name tattooed across your chest? Adorable, but are you going to know who the hell Kandy Kane is when you wake up? Bet your wife will have a few questions too.

I offer for your consideration a show called Bad Ink. Set in Vegas, it’s a reality show about two tattoo artists who drive around looking for bad tattoos, and figuring out how to fix them. Yep, 30 minutes of Vegas tattoos. Let me assure you there is no shortage of bad ink. 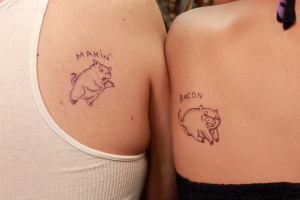 This is not kosher!

Some of the tattoos are bad because they are poorly executed, by someone who is more of a butcher than an artist. Others are bad because…well, alcohol, primarily. And a few are a scary combination of both. How else do you explain a guy who had a tattoo of a heart with “Will You Merry Me?” scrawled across his arm? Or the guy who got a tattoo that made his belly button look like it was a monkey’s butt? Thank goodness they were able to transform it into a roaring lion! 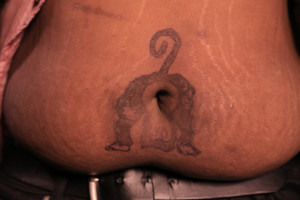 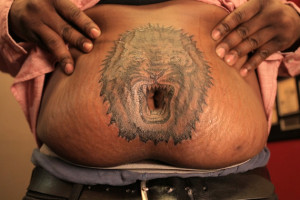 Best of all, and you know I couldn’t make this up, was a guy whose nickname was “booger.” His tattoo was a self-portrait with his finger up his nose. For some reason, his girlfriend refused to marry Prince Charming until he did something about it.

Some tattoos are just silly and obvious, like vanity license plates. If you drive a red Corvette I don’t think you need plates that say RD VETTE. We can see that for ourselves. And no plates that say things like HOT DUDE; we’ll be the judge of that. Because from here you look like a chimp driving a sports car. But unlike vanity plates, tattoos are forever.

I always like to educate my readers, so here are a few more pointers for those of you just itching to get a tattoo:

Like Loading...
This entry was posted in Uncategorized and tagged Animals, College, Culture, Humor, Imagination, Social, Television. Bookmark the permalink.