What ever happened to the customer is always right? A couple weeks ago I ordered dinner from a delivery service, Bite Squad. I truly hardly ever order out anymore but I wasn’t up for cooking. About 45 minutes after I ordered they called and said they couldn’t get a hold of anyone at the restaurant. Okey dokey.

I’m not sure why it took 45 minutes (which is 92.3 minutes in Hunger Time) to let me know, but I went ahead and placed an order with a different place, an Italian restaurant I’ve frequented in person and know to be reliable. The only problem is that my favorite pasta dish there comes with prosciutto, and I have this whole vegetarian thing going on. When I order it at the restaurant it’s never a problem to 86 the oink (in my head I think of that as restaurant talk but really I have no idea). 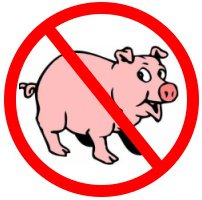 Now I’m really hungry. OK, honestly I’m always hungry but this time it was real.  Anyhoo, food came quickly but when I opened up the carton my pasta was absolutely laden with prosciutto. Yuck. Inedible. I called the restaurant and they were very apologetic and immediately said they would refund my money. Well handled. I went back to standing in front of the freezer to see what might constitute a meal now that two delivery efforts had failed.

A few days later, I noticed that no refund had come through on my credit card. I emailed Bite Squad “support”, and a chipper gentleman quickly responded that they were happy to issue a credit to my Bite Squad account. I let him know I would only be happy by getting a real credit on my real credit card. We went back and forth a couple times until he consulted his manager (which I’m picturing as a 12 year old sitting in his mom’s kitchen running an online empire) and they graciously agreed to actually refund my money.

But, a few days later, still no refund on the credit card. Now I’m annoyed, and of course really hungry, and even though that is now irrelevant, I think it’s worth mentioning. So I email the alleged “support” people again, and an overly perky gentleman replies that they realized they really can only issue a credit to my Bite Squad account, because I used a credit to make the purchase, referring to the “credit” from the first order that evening, that was canceled. Arrgh! WTF? I responded with, honestly, a not so nice email and mentioned the power of social media. Then I started Tweeting like a deranged, and frankly, hungry, bird. They Tweeted a response to the effect of “contact support” which really hacked me off. We went a few rounds.

I’ve just received an email saying they’ve reconsidered and now are willing to offer me a refund, which will take up to 5 days to post, which is interesting since it took 0 days to post the original charge. But OK. We’ll see. We shall see. But note this—Bite Squad bites. And I no longer work so I can make it my full time occupation to seek revenge for poor service. Let’s just hope I don’t have to.

Like Loading...
This entry was posted in Uncategorized and tagged Culture, Diet, Social Media, Stupidity. Bookmark the permalink.

10 Responses to Bite This!