Bethenny And Me: A Star Is Nearly Born

So this week I came dangerously close to finally realizing my destiny as a star. I am a huge Bethenny Frankel fan and I just happen to have a connection that got me tickets to a taping of her talk show, bethenny. I can now divulge that my connection is called the internet. Yep, I went online and put in for a ticket, then waited impatiently.

When I received my confirmation email, I was able to volunteer to be a “participating” audience member; someone willing to stand up and opine about the topic of the day. Consider this: 1) I have an opinion on absolutely everything and 2) My opinion is the right opinion and 3) There are few things I love more in life than hearing the sound of my own voice in a microphone. So hell yes I volunteered!

I was all set to head to NYC for the taping last Tuesday. On Monday night my phone rang, and it was one of the producers! He asked me if I was really willing to participate and I emphatically confirmed my interest. He told me about one of the topics and asked my opinion, which I promptly offered up. He once again asked if I was willing to speak during the taping and I assured him that, given a microphone and an audience, I would talk all day long. And with that I was upgraded to a VIP, priority ticket. In your face! 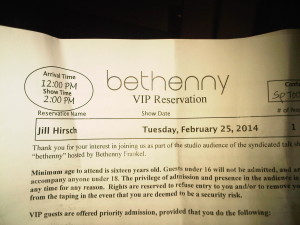 Because I am so important, I only had to wait in the bitter cold for 45 minutes, as opposed to the 60 minutes the little people had to wait. I felt very special as I was one of a select handful of 40 or so VIPs. 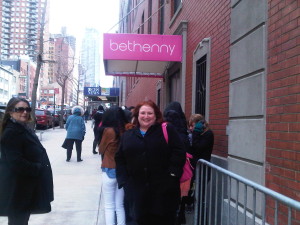 In my head I prepared for my big moment with Bethenny’s bedazzled microphone. I would be so articulate, insightful, warm and funny. Brilliant, really. And the producers would grab me after the show and offer me my very own talk show on the spot. Yep, all of that was swirling around in my head, proving that there’s not much going on up there because I have room for this whole fantasy.

I guess all that might have happened, if Bethenny had ever called on me when I raised my hand and knocked over a couple of old ladies who were trying to steal my spotlight. But she didn’t call on me. So that was that and then it was over. Despite the fact that I did not steal the show, it was a fun day and I enjoyed the taping. The show is airing today, Monday, March 3. You won’t see me making a comment but you might see a blur of me in the audience. I’m the one who looks very much like she has star potential. 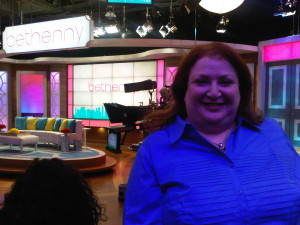 The good news is I am still completely available to anyone who wants to cast me in a show or movie or anything at all. Completely. Available. Call me.

Like Loading...
This entry was posted in Uncategorized and tagged Career, Celebrity, Imagination, Self, Television. Bookmark the permalink.

27 Responses to Bethenny And Me: A Star Is Nearly Born