Were you breathing easy, thinking I was done with stories from our February cruise? Oh no, think again! Our cruise offered us one day in Port Canaveral, Florida. We have both already been to Kennedy Space Center, twice, and everywhere else that area has to offer;  Cocoa Beach and I Dream of Jeannie Way and Ron Jon’s Surf Shop, so we weren’t sure what to do with the day. Orlando is just an hour’s ride away but we’ve been to Disney, Epcot, etc., and a theme park was way more than we could manage, especially with just one day.

Dan did a little research and found a magical place that heretofore had only existed in my mind, The Chocolate Kingdom Factory Adventure Tour. I will admit that it was mostly designed for little kids, and featured an animated dragon and prince as our tour guides, but I’m not above that kind of thing when it is a chocolate factory and many samples are offered throughout the tour. 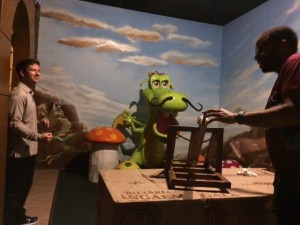 For the record, I did not elbow that little kid to get to the free samples. She was clumsy and surely tripped over something, like my foot. Bygones.

Anyway, it was a pretty cool tour and at the end we got to design our very own candy bar and watch it being made in front of our very own eyes! Then I ate it with my very own mouth! 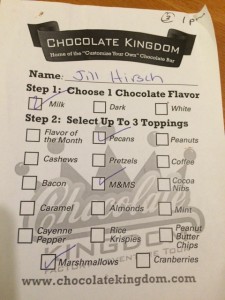 My custom candy bar, and yes, it was as delicious as it sounds

I still had a little chocolate around my mouth but no time to waste, it was on to dinner. Hey, remember that amazing waiter I once had, Farrell? No? Geez, here’s a reminder. While Dan and I were in Orlando we decided to have dinner at the same restaurant in the hopes that Farrell would still be working there. Our hopes were dashed-he was gone. But the manager and our new server, who was lovely but not nearly as charismatic as Farrell, assured us that he was doing well. They also intimated that many people asked about Farrell all the time. They agreed with us that he was very, very special. A once-in-a-lifetime type experience. 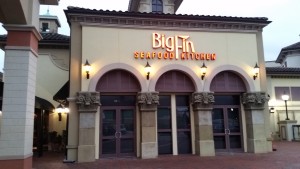 Dinner wasn’t nearly as fun without Farrell scolding us for our menu choices. And although I had been to the Chocolate Kingdom mere hours earlier, I ordered that chocolate dessert again, in a to go box, because when I see “fudge brownie covered in hot fudge lovingly placed in a box made of chocolate” on a menu, you can bet your ass I order it. Dan had the key lime pie in Farrell’s honor, but of course it was too late for Farrell to appreciate that we finally understood his wisdom.

There’s a lesson here folks. Let your beloved waiters know how much you care. Tell them you love them, before it’s too late. Farrell, if you’re out there somewhere…I heart you.

Like Loading...
This entry was posted in Uncategorized and tagged Culture, Diet, Family, Travel. Bookmark the permalink.