Just as we little people must interview well in order to land a job, politicians and even The Great Trump himself have to campaign to win the job of…well, whatever it is they are going to claim to do.

If politicians were subject to a garden variety job interview, the key to success would vary greatly depending on whether or not they are a Mere Mortal Politician or Trump. Here are what I believe to be winning strategies for each for acing the interview and landing the job…

Mere Mortal Politician: Humble beginnings, with any luck one or both parents were blue collar workers, if not, make it seem that way; grainy pictures of immigrant grandparents working on the railroad scores bonus points

Trump: Rich, amazing, great, fantastic, best ever, even though he started with paltry $1M loan; mother, daughter, sister, grandma and aunts all hot enough to bang if he wasn’t a blood relative

Trump: Iviest Ivy League. Amazing student. Great student. Best student ever. Best roommate ever. Hottest man on campus. Banged women who were as hot as his daughter, whom he would bang, if she wasn’t his daughter

Mere Mortal Politician: Depends on audience. Common themes include knowing how to balance a budget, cut taxes, keep America safe, reach out across the aisle and/or never compromise; whatever is needed

Trump: Amazing, great, best ever at everything; domestic policy, tax code, federal budget, diplomacy and/or war mongering, ending terrorism, commanding troops, the art of the deal, building walls; special strengths include ridiculing losers, not getting captured in a war in which he never fought, and making balloon animals. Produces amazing, great, best ever offspring, hot enough to bang

Mere Mortal Politician: To selflessly represent the good people of the best damn country in the world

Trump: To continue to be amazing, great, fantastic; to trade in wife for younger, hotter version every 7-10 years; to find someone as hot as his daughter and bang her; to travel around the world building huge, great, amazing walls and making other countries pay for them; has an amazing, great, fantastic plan to  build world peace, end hunger, create jobs for all deserving, truly American, white Christians; no need to discuss specifics just know that it will be done

Trump: Making money. Making amazing amounts of money. Greatest builder ever. Best billionaire ever. Richest person in country. Hottest wife and hot daughter whom he would absolutely bang if he wasn’t her dad. Depending on audience may or may not support KKK; would never wear a white hood, though, because orange tan stains don’t come out

I believe these are winning strategies for each and every candidate. Follow these guidelines and in no time at all you will hold elected office and will spend your days stomping your foot and refusing to do your job, while reporting to Emperor Trump, Commanderest-in-Chief 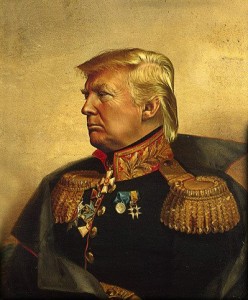 Like Loading...
This entry was posted in Uncategorized and tagged 2016 Election, Career, Irreverent, Politics, Stupidity. Bookmark the permalink.

10 Responses to A Helpful Guide To Landing Elected Office